It looks like Kalyani´s decision will further separate her and Anand. Read on to find out more. 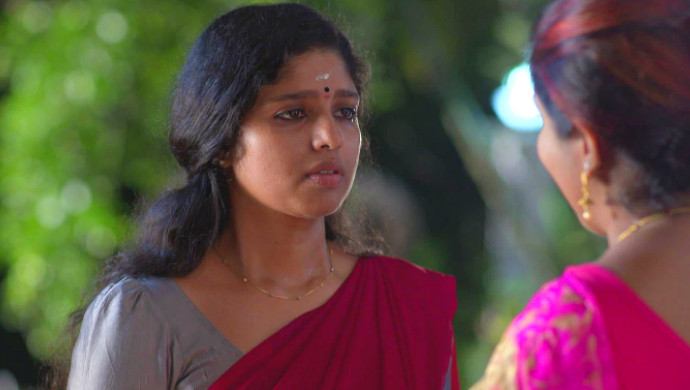 In the previous episode, we Aravind and Subramanian frantically searching for Anand who walked out of the house in a fit of agony after Kalyani announced her decision to marry Chandrapratap. They run into Kalyani outside the temple and curse her for reducing Anand to this state. Aravind even tells her that Anand´s biggest mistake was to fall for a woman of low standards like her and adds that she will never find peace for the rest of her life in any temple in the world. They then get word that Anand was spotted at the rooftop of a hotel and rush there. Meanwhile, Akhila is worried about both her sons´whereabouts.

In the current episode, Aravind and Subramanian walk up to a hotel roofbar to find Anand drunk and almost passed out there. He revives a bit when he sees Aravind and drunkenly apologises for slapping him. Aravind takes him home where a worried Akhila is waiting at the front porch with Sivaramakrishnan, Vilasini, Jayanthi and Kalyani who had been pacing outside anyway. Akhila sees Anand drunk and staggering and slaps him and runs off, upset. Sivaramakrishnan, who is equally angry, tells Anand to get sober and get a grip on himself. They all go into the house as Kalyani looks pained at what happened to Anand.Vilasini, however is over the moon. She tells Kalyani that she was a witness to her embracing Anand at the temple and threatens to narrate this story to Akhila unless Kalyani does her bidding. She then tells Kalyani that she must marry Chandrapratap the very next day at the registrar´s office. Kalyani reluctantly agrees in order to prevent Vilasini from telling Akhilandeshwari about the episode at the temple. Vilasini then tells her that she can get out of the house on the pretext of shopping with Chandrapratap.

If you have only recently started watching the series, here´s what you need to know. Anand, the scion of the wealthy Thiruchambarath family and Kalyani, the household cook, are gradually falling for each other. However, this is not acceptable to the iron-willed Akhilandeshwari, the matriarch of the family and Anand´s mother. As a result, Kalyani comes up in conflict against Akhilandeshwari.

Chembarathi 28 November Written Update: Aravind Curses Kalyani For What She Did To Anand