Anand slaps his brother, walks out of the house and disappears. Where does he go? 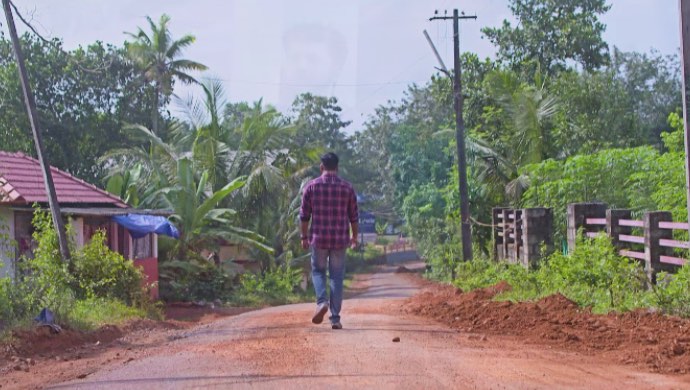 In the previous episode we saw Akhila in a turmoil over the Chandrapratap issue. On one hand, she had a promise to upkeep, on the other hand, her promise might very well ruin Kalyani’s life. Later when the family is gathered in the living room, Chandrapratap falls at her feet and begs for forgiveness. He claims that his cold drink was spiked and he never knew he was drinking alcohol. Akhila sees through his farce and slaps him. She tells Kalyani that the decision lies entirely with her. To everybody’s surprise Kalyani agrees to marry Chandrapratap. Anand gets upset and leaves the room.

Dasan asks Kalyani why she agreed to marry a man of such ill-character like Chandrapratap. Kalyani says it was because she wanted to help Akhila keep her word. Das praises her but feels bad that her decision would ruin her life. He asks to speak to Sujatha privately and requests her to look after Kalyani until she is married. Meanwhile Anand strides out of the house looking very angry. Aravind and Subramanian tried to stop him and console him, but he lashed out at them, slapped Aravind and tells them that he is going. He is not sure when he will come back or if he will come back, but he just can’t stay in the house anymore. And thus, he walks out of the gate. Akhila meanwhile probes Vilasini about Chandrapratap’s job in Mumbai. As Vilasini starts to feel cornered, Akhila tells her that she wants to employ Chandrapratap in one of their own factories. But to Vilasini’s dismay, the job would be right here in this city. It would spoil Vilasini’s plans to send Kalyani far, far away.