Kalyani finally manages to reach Anand's room to thank him for saving her life. But Anand's response shocks her. 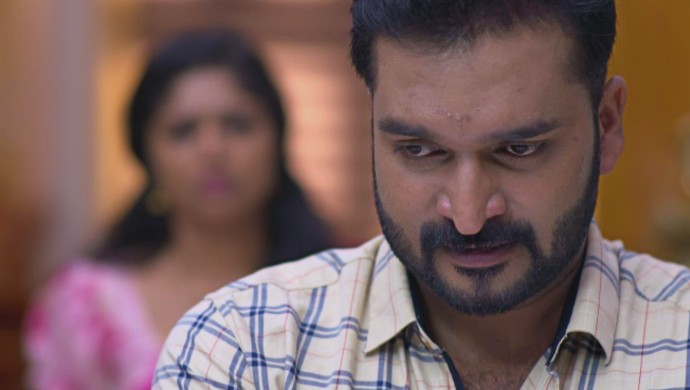 In the previous episode, Anniyankuttan tells Kalyani about Anand getting emotional when she was unconscious and hopes that they will get together someday. He prays to his mother’s photo for help and is elated when a flower drops from her photo. Meanwhile, Akhila sees a news article about her family that suggests that Kalyani and Anand’s link up written about in the media is part of a conspiracy. She worries about Kalyani’s life and summons her to stay at the Thiruchambarath mansion until she gets married to Chandrapratap.

When Akhila informs Anand that Kalyani will be staying at the mansion until her marriage to Chandrapratap in order to keep her safe, Anand feels tormented. He goes to his room and takes out Kalyani’s photograph along with her wedding invitation and tries to burn it. Aravind and Subbu spot him and try to talk him out of it. Just then Kalyani comes to his room, wanting to talk to thank him for saving his life. Anand is still in an emotional turmoil and doesn’t even turn around to look at her face. When she requests him to turn around, Anand retorts that he hates seeing her face. An upset Kalyani runs out of the room and goes to the temple.

Anand follows her to the temple where he overhears her praying to God. Kalyani says that even if she can never have him, in her heart there is only room for Anand and no one else. She cries and says that Anand is like God to her. Then she turns around to find Anand standing there.

Five Original Series To Watch Over The Weekend