However, Anand has no idea where she is. Will Priyanka's plan to ruin the entire Thiruchambarath family succeed then? 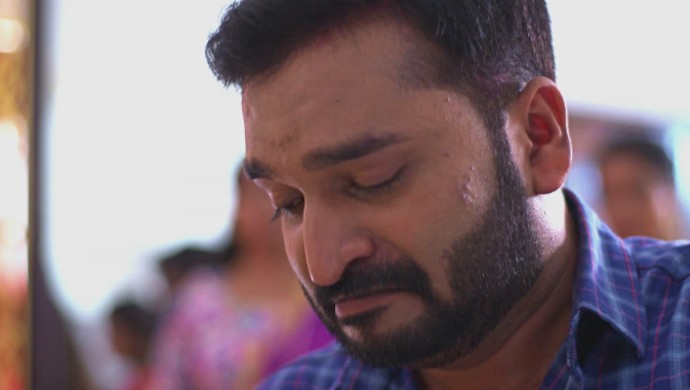 In the previous episode, we saw Priyanka instructing her goons to dump Kalyani, unconscious, tied up and gagged in the water tank inside the Thiruchambarath mansion grounds. The plan was that the next day, when the motor would be switched on, the water level would rise and drown Kalyani in it and the incident would ruin Thiruchambarath family. While Anand goes around the city looking for Kalyani, Vilasini and Jayanthi discuss the issue of Kalyani getting kidnapped. Both of them declare that it would be an altogether good thing if Kalyani never returns. Chandrapratap overhears them and threatens them. Akhila calls up Anand and informs him about the bad omen she sensed in the ‘puja’ room. The episode ends the next day morning when Vilasini asks Sujatha to switch on the motor as there is no water running in the bathroom taps. Sujatha switches it on and the tank where Kalyani is lying unconscious starts filling up.

The current episode opens with Anand returning home dejected after having failed to locate Kalyani. He asks his mother for forgiveness that he was unable to carry out her task. Meanwhile, a panic stricken Kalyani, awakened by the falling water starts to thrash about in the tank, trying to free herself. The others are racking their brains trying to figure out where Kalyani might be imprisoned. Anand suddenly remembers a conversation with Priyanka where she says that he will only find Kalyani, dead, not alive the next morning and it will ruin the Thiruchambarath family. He suddenly realises that Kalyani must be stashed in Thiruchambarath. They begin hunting the grounds and find her almost drowning in the tank. She is rescued, but they are unable to revive her. Everybody is stunned when Anand grabs her hand and pleads with her to wake up for his sake. He gets very emotional, completely oblivious to the people around him. Akhila watches this scene unfold in shock. Then the doctor arrives and while she is administering to Kalyani, an angry Anand gets in his car and drives off to Priyanka’s house to confront her.

If you are new to the series, here’s what you need to know. Kalyani is a village girl who enters the Thiruchambarath household as a cook. Her father Das has been the family chauffeur for many years now. This wealthy family is ruled by the iron fist of Akhilandeshwari. However, when Kalyani and Akhila’s son Anand fall for each other, she comes up against the strong will of the matriarch.