Anand searches frantically for Kalyani only to discover that she has been kidnapped. 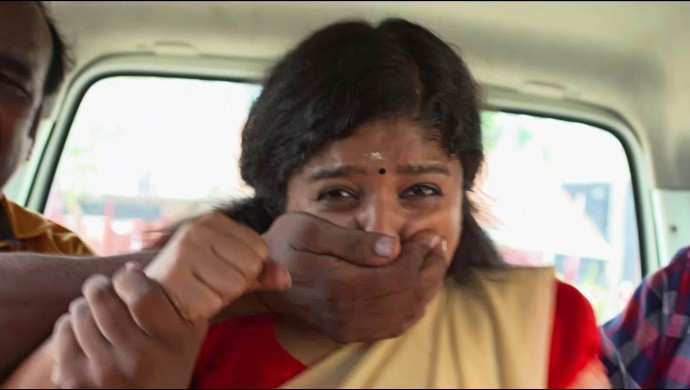 In the previous episode, we saw that Akhilandeshwari’s plan to get Kalyani and Chandrapratap engaged in front of the gathered press fails to materialise when the ring gets stolen. When Vilasini finds out Anand has the stolen ring, she suspects him to have feelings for Kalyani. Meanwhile an upset Kalyani goes to the temple and then goes missing. Her panic stricken father goes to Thiruchambarath seeking Akhilandeshwari’s help even as Anand and Aravind are out looking for his daughter.

Today’s episode opens with Akhilandeshwari wondering about Kalyani’s disappearance. Vilasini says that maybe Anand kidnapped Kalyani because he did not want her to get engaged to Chandrapratap. This angers Akhilandeshwari who warns Vilasini and then calls Anand and asks him to return to the house right away. When he enters, Akhila asks him if Vilasini’s accusation is true. Even as Anand angrily denies it, Aravind adds that Kalyani disappeared because of Vilasini who beat her up and kicked her out of the house. This enrages Akhila who slaps Vilasini and then tells Anand that he must help his mother keep her promise to Chandrapratap by somehow finding Kalyani before morning strikes. As Anand searches for her, Akhila calls him and tells him that it’s possible that his ex-fiance Priyanka kidnapped Kalyani to take revenge on the family. Vilasini overhears this and calls up Priyanka to warn her that Anand was headed to her house. Priyanka acts cool and denies having anything to do with Kalyani’s disappearance. But it seems Akhila guessed it right. Priyanka did kidnap Kalyani. In the next scene, she outlines to Kalyani how she will ruin the whole Thiruchambarath family’s social and economic status, starting with the killing of Kalyani. As Kalyani is loaded into a van by goons, Anand arrives at Priyanka’s house. Will Anand be able to rescue Kalyani before its too late? Will Priyanka’s plans of revenge succeed this time?

Those who are new to the series, here’s what you need to know. Kalyani and Anand secretly marry each other due to certain difficult circumstances. However, Akhilandeshwari, who has very strict notions of honour and wealth would not agree to a marriage between Anand and the family cook. Only Anand’s brother Aravind and his wife know the secret.

For more such entertainment and family drama, watch Sumangali Bhava, streaming on ZEE5.

Akshara Haasan Takes A Nostalgic Trip With Pics From Childhood