Anand finds broken bangles outside the temple when he goes in search of her. He gets worried. 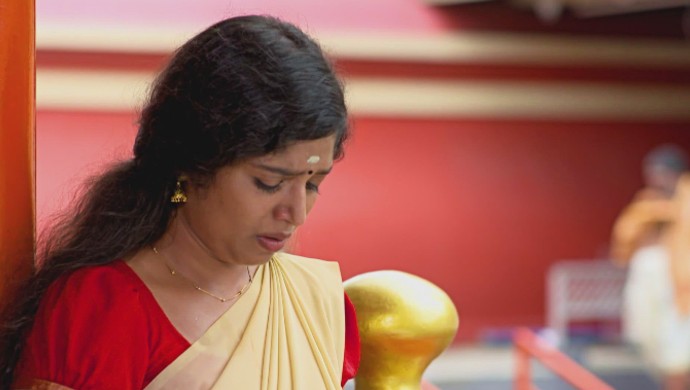 In the previous episode, we saw Akhilandeshwari trying to get Kalyani and Chandrapratap engaged to each other during the press meet so that the media would stop writing about her son and Kalyani being together. However, the ring goes missing and the plan is foiled. While Akhila walks out upset, Vilasini is even more upset as it was her plan to do so. She confronts Kalyani, accuses her of stealing the ring, beats her up and kicks her out of the Thiruchambarath mansion. Anand confronts Vilasini about it and produces the stolen ring. Vilasini later tells Jayanthi that Anand producing the stolen makes one thing clear – he doesn’t want Kalyani to marry Chandrapratap. Which means that Anand is probably in love with Kalyani.

Watch the latest episode of Chembarathi here. Scroll down to read the rest of the story.

Today’s episode is a double one that celebrates the 300th episode of Chembarathi. It opens with Akhila sitting in a trance, worried about what the incidents of the day will lead to. Akhila’s husband, Krishnan, tries to console her, says whatever fate has in store for their son will happen.

Meanwhile, an upset Kalyani who had cried herself to sleep wakes up while her brother is out buying medicine for her headache. She talks to her deceased mother’s photo hanging on the wall and then walks out of the house. She is seen walking down the street. Anniyan kuttan returns to find his sister missing and goes in search of her.

Anand also discovers that Kalyani had walked out of the house and goes searching for her in his car. He sees Anniyan Kuttan on the road and tells him to go home to his father while he, Anand, will continue the search. Thinking that she might have gone to the temple, Anand goes there, to find spilled chembarathi flowers on a banana leaf near the temple tank. The tirumeni at the temple tells Anand that he saw Kalyani walk out crying from the temple. Alarmed, Anand goes in search of her. Outside the temple, he sees pieces of broken bangles lying on the ground. He knows these bangles belong to Kalyani only because he bought them for her. He gets alarmed thinking something bad has really happened. Aravind and his cousin also join him in searching for Kalyani, but nobody is able to figure out what happened. Where has Kalyani gone to? What do the broken bangles signify? Has she given up on their marriage?

Those who are new to the series, here’s what you need to know. Kalyani and Anand secretly marry each other due to certain difficult circumstances. However, Akhilandeshwari, who has very strict notions of honour and wealth would not agree to a marriage between Anand and the family cook. Only Anand’s brother Aravind and his wife know the secret.

For more such entertainment and family drama, watch Sindhooram, streaming on ZEE5.

Watch Ente Mezhuthiri Athazhangal - The Love Story Of A Chef Who Falls In Love With A Candle Designer.