In today's episode of Chembarathi, Vilasini figures out that Jayanthi's suspicion about Anand hiding Kalyani in his room was right. 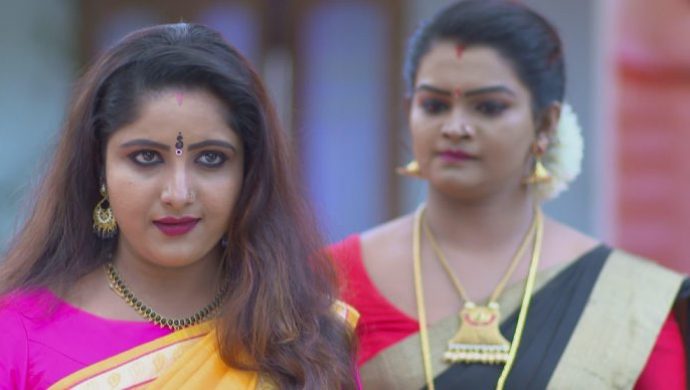 Previously on Chembarathi, Anand plans to make Jayanthi walk in front of Vilasini unnecessarily so that Kalyani can sneak out without getting noticed. Anand calls Jayanthi upstairs and asks her to bring him some hot water. When Jayanthi comes back from the kitchen Anand asks her to keep his laptop in Aravind’s room.

Anand asks Kalyani to quickly hide her face using the tray and leave the house. Vilasini stops Kalyani on her way out thinking that it is Jayanthi and asks her to tell Das to buy flowers for Ganga. Kalyani sneaks out and hides in Anand’s car but is shocked when Das takes the car to buy flowers.

Anand gets angry when he finds his car missing and calls Das to bring it back. He figures out that Kalyani is hiding in the car from his conversation with Das but is astonished when Vilasini asks him about Kalyani.

In today’s episode of Chembarathi, Vilasini asks Anand about Kalyani’s whereabouts. He tells her that Kalyani will come for the dance school to the dance competition. He is relieved when he sees Das coming with his car and finds Kalyani hiding in the back seat. As he is about to leave with Kalyani, he sees Jayanthi running towards him.

Kalyani and Anand get anxious when Jayanthi requests him if he can drop her till the competition venue. Anand tells her to sit in the front seat and drives to the venue. On the way, Jayanthi’s questions about the perfume in the car which irritates Anand. He drops Jayanthi at the venue and while parking the car asks Kalyani to pretend that she is coming back from the dance school.

When Jayanthi spots Kalyani at the venue, she suspects her of lying about coming from the dance school as she finds the perfume’s scent in the car. She is quick to tell Vilasini about her suspicions as she arrives with Ganga for the competition. She tells her about Kalyani wearing a similar saree to her and how she suspects her of being in Anand’s car.

Vilasini tells her that Anand fooled them both and tells her how she was right to suspect Kalyani to be in his room. She discusses a plan to stop her from winning the competition. Jayanthi is shocked to hear about Vilasini’s plan and takes her handbag from her. Meanwhile, Akhila meets Guruji at the temple and tells him about her worries. He suggests her to do a pooja by wrapping saffron and turmeric in the paper. He tells her if she is to pray and find saffron, Ganga will win the competition, thus saving her family pride. Who will win the dance competition? Stay tuned to find out!