In today’s preview of Chembarathi, Kalyani confidently explains the answers to Ganga and Vilasini 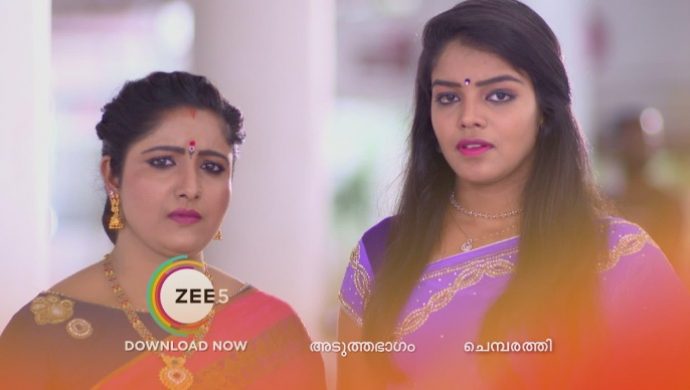 Previously on Chembarathi, Ganga touches Akhila’s feet for blessings before the exam. Anand asks Akhila to bless Kalyani as she is also appearing for the exams representing his company. Akhila refuses to bless her and leaves as she tells him how her family is more important than business for her.

Anand and Aravind are elated when Kalyani seeks blessing from Akhila’s chappals. When they reach the exam hall, Kalyani is forced to use the washroom after Ganga’s henchman spills juice on her. Ganga throws a smoke grenade at her and locks Kalyani inside. The latter cries for help and then faints, suffocated by the smoke around her.

Anand finds an unconscious Kalyani inside the washroom and wakes her up. As they rush back to the exam hall, Vilasini gives Kalyani a pen to write because Kalyani forgets her pen inside the washroom. Ganga suspects Vilasini of helping Kalyani, but is relieved to know about the special disappearing ink in the pen.

In today’s preview of Chembarathi, Kalyani meets Vilasini and Ganga outside the exam hall. She confidently tells Ganga of all the right answers she wrote in the exam. Both women are surprised to know that Kalyani got all the answers right. Anand and Aravind are seen in the background surprised to see Kalyani talking to Vilasini and Ganga after the exam. Will Vilasini tell her about the disappearing ink in the pen she gave her?