In today’s episode of Chembarathi, Anand yells at Ganga as she requests him to have lunch with her. 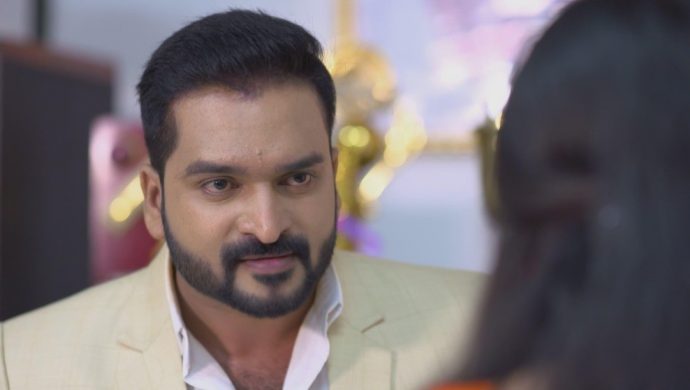 Previously on Chembarathi, Anand saves Kalyani from Vilasini’s intimidation. Nandana gets angry at Vilasini for ruining her plans by throwing away the facial mix. As Anand and Kalyani prepare to leave for the office Ganga confronts them. She insists on joining them but gets rejected by Anand. Nandana finds Ganga worried about the events and motivates her to keep trying to win Anand’s heart.

In today’s episode of Chembarathi, Anand starts preparing Kalyani for the competition. She is surprised to see him making her drawing and praises his drawing skills. Aravind walks in to see the couple chatting and continues to praise his brother’s drawing with Kalyani. Back in Thrichambarath, Ganga plans to cook lunch for Anand so that she can meet him in his office. She gets Akhila’s permission for the same and starts cooking with Sujatha in the kitchen.

During their practice for the competition, Kalyani tells Anand that she is doubtful of Akhila accepting her as his wife even if she wins the competition. Anand encourages her by telling her that Akhila won’t go back on her word as the family will look to keeping their goodwill in media intact. As Anand gets busy with work, he asks Kalyani to practice in the hall.

Meanwhile, Ganga arrives at the workplace with lunch in hand and Aravind directs her to Anand’s office. But first, she goes to the cafeteria and sets out a table for Anand with the meal she prepared. Anand is startled to see Ganga walking into his office. She asks him to join her for lunch but he refuses because he is irritated by her presence.

Ganga insists that Anand join her for lunch. Annoyed by her constant requests, Anand starts yelling at her. Ganga gets upset when he tells her to leave his office. Aravind feels elated to see Anand threatening to call the security on her. Later on, Aravind finds Kalyani wandering outside and tells her about Anand’s reaction to Ganga. Kalyani is shocked to hear about the events that happened in her absence. How will Ganga retaliate to the humiliation? Stay tuned to find out!

#ThrowbackThursday :This Pic By Kalki Star Tovino Thomas Shows His Struggles As An Actor