In a fit of anger, Kalyani decides to tell her father about having to marry Chandrapratap the next day, in a ceremony arranged by Vilasini. 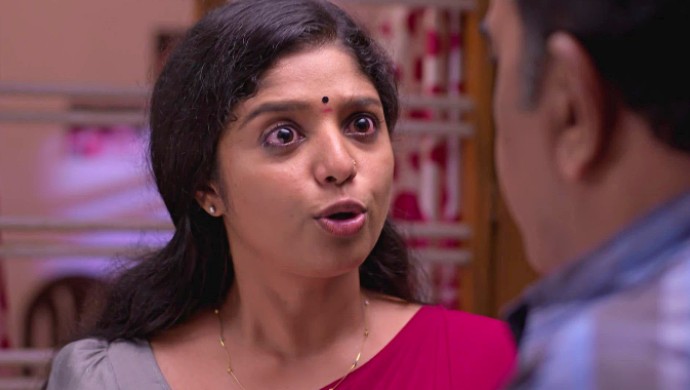 In the previous episode, we saw that Anand stumbles home drunk and Akhila slaps him. Later, Vilasini tells Kalyani that she was witness to her embrace with Anand at the temple. She threatens to tell Akhila what she saw unless Kalyani marries Chandrapratap the very next day at the registrar’s office. Kalyani reluctantly agrees.

Akhila repents slapping Anand and cries to her husband. Kalyani lies in bed late at night, restless and upset over the events of the day. She finally walks over to the outhouse and wakes up her father, telling him that she just felt like seeing him. As she spots her mother’s photo hanging on the wall, she gets angry thinking about all the things that happened to her. She snaps at her father and tells him that she will be married by this time tomorrow. Her father gets alarmed on hearing that she will be doing a registered marriage with Chandrapratap and also that this is a plan made by Vilasini. However Kalyani doesn’t tell him why she agreed to it. She glares at him in anger and walks off. Next day morning, Akhila wakes up Anand and behaves cheerfully with him, insisting that he should come with her to an important event. She also asks him to meet a businessman in Mumbai as well as a couple of other jobs. She tells him that he needs to relieve Aravind of some of his load now that he is getting married. Will Kalyani end up actually marrying Chandrapratap? Will Dasan be able to save his daughter? To find out, watch Chembarathi every night on ZEE5.

If you’re watching the series for the first time, here’s what you need to know. Anand, a rich business scion and his household cook, Kalyani, develop feelings for each other. However, his mother Akhilandeshwari, who is also the matriarch of the family is uneasy about this union as she has different notions of the wealth and status of her prospective daughter-in-law. She arranges for Kalyani to be married off to Chandrapratap. However Akhila changes her mind when Chandrapratap stumbles home roaring drunk after having caused a scene on the road, misbehaved with Sujatha, the head cook and nearly getting beaten up the locals. However, Kalyani insists that she will still marry him in order to help upkeep Akhila’s promise. Her decision upsets Anand.

For more entertainment and drama, watch Pookalam Varavayi, the love story of Abhimanyu, who hates women and Samyuktha, who dislikes Abhimanyu, now streaming on ZEE5.