In today’s episode of Chembarathi, Akhila is disturbed as she is reminded of Kalyani’s sacrifices for the family in the past. 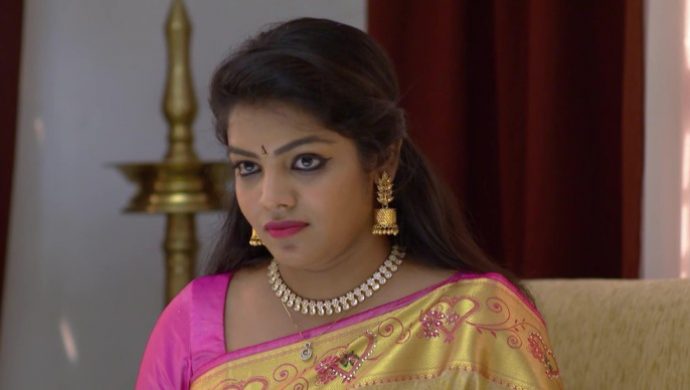 Previously on Chembarathi, Akhila agrees to Anand’s request to take Kalyani back into Thrichambarath. When she goes back to Thrichambarath, Krishnan thanks Anand for not revealing his feelings for Kalyani. On the other hand Aravind is angry at Anand for doing the same.

Anand tells Aravind that he didn’t reveal his true feelings for Kalyani because he was worried about Akhila taking her own life. Anand is quick to call Kalyani. He tells her about how Akhilandeshwari has agreed to let her work in Thrichambarath after his requests.

In today’s episode of Chembarathi, Aravind and Subramanian wake up Anand to tell him about Ganga’s father telling them about his son. Anand gets irritated at both of them showing up drunk and tells them that he was dreaming about Kalyani. When Aravind shows him a video of Ganga’s father drunk, he calms down and becomes happy.

Meanwhile, Akhila stands outside Thrichambarath and reminisces Kalyani’s sacrifices for the family in the past. She remembers when Kalyani saved Krishnan’s life and how she asked the police officers to arrest her to save the family’s pride. Krishnan is disturbed by Anand’s plans for the future and worries about Akhila’s decision regarding the couple.

The next day, the family gathers as Ganga and her parents wait for Akhila to start the pooja before the wedding. Aravind, Anand and Subramanian are quick to ask Ganga’s father about his son. Aravind tells Akhila that Ganga is trying to cheat her but is shocked when he finds the video is missing from his phone.

Ganga smiles at Aravind as she has already deleted the video from his phone when she overheard his conversation from last night. Ganga complains to Akhila about how Aravind is trying to ruin her marriage with Anand. When Subramanian supports Aravind’s argument, Akhila gets angry and confronts them. What will be Akhila’s reaction? Stay tuned to find out!

Who is your favourite? Kalyani From Chembarathi Or Samyuktha From Pookalam Varavayi

These Adorable Malayalam Celebrity Pets Are Going to Make You Go AWW!