In today’s episode of Chembarathi, Ganga tells Anand about her privileges as his fiancée. 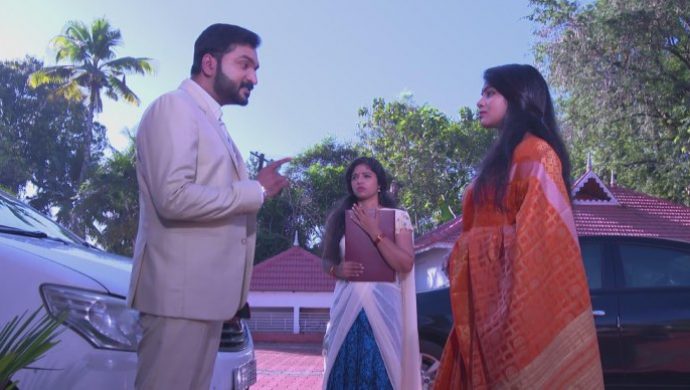 Previously on Chembarathi, Akhila gets disturbed by a phone call and asks Aravind to switch on the TV. The whole family is shocked to hear the news about Aravind’s letter. According to the letter, the winner of the brand ambassador competition wins Anand’s hand in marriage. Akhila yells at Aravind for his carelessness but he claims to have no clue about the sudden turn of events. Ganga makes use of the opportunity and asks for Akhila’s permission to take part in the competition. The latter agrees to Ganga’s decision as she shows confidence in winning the competition.

Nandana, who was waiting for Kalyani to apply the mix, gets disappointed but keeps away from interfering as she sees Anand approaching. He saves Kalyani from Vilasini and asks her to come with him to the office. As the couple leave, Nandana confronts Vilasini and yells at her for ruining her plans by throwing away the facial mix.

Anand asks Kalyani to get inside the car to leave for his office, but they get stopped by Ganga. Anand asks her to move out of the way as she requests him to take her with him to the office. She tells him about her privileges as his life partner but Anand retorts by saying that they both are not married yet. Before leaving, he also adds that if Kalyani wins the brand ambassador competition, he will happily marry her.

Aravind is delighted to see his brother and Kalyani walking into the office. Anand asks Aravind to start prepping Kalyani for the competition. Back at Thrichambarath, Nandana finds Ganga sitting alone looking worried about the events that happened earlier. When Nandana gets to know about Anand rejecting her requests, she urges Ganga to consider her whole situation as a race and defeat Kalyani. She asks her to plan ahead and come up with a reason to visit Anand in his office. What will be Ganga’s plan to win Anand’s heart? Stay tuned to find out!