In today’s preview of Chembarathi, Nandana is seen waiting for Kalyani to apply the adulterated facial mix. 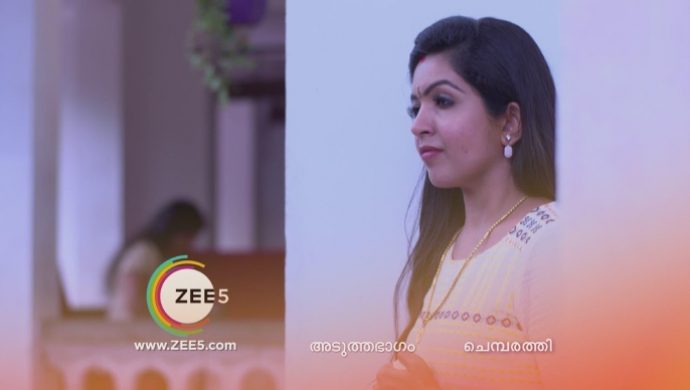 Previously on Chembarathi, Ganga and Priyanka continue discussing their plans for Akhila. At Thrichambarath, Akhila is startled by a phone call and asks Aravind to switch on the TV. The family is shocked to hear the news of a letter with Aravind’s signature declaring the winning prize of the brand ambassador competition.

According to the letter, the winning prize is Anand’s hand in marriage. Akhila yells at Aravind for being careless with his signature, but he claims to be clueless about the same. Ganga makes use of the opportunity and asks for Akhila’s permission to take part in the competition. The latter is worried about Anand as even Kalyani is a participant in the competition. But since Ganga keeps insisting about it, Akhila agrees to her demands.

Later that day, Nandana sees Kalyani busy making a facial mix to prepare for the upcoming brand ambassador competition. She is reminded of the time Kalyani burnt her face mixing calcium powder in her facial mix and decides to take revenge for the same.

In today’s preview of Chembarathi, Nandana is seen hiding as Kalyani comes back from inside. Nandana has already mixed the powder in the facial mix and waits for Kalyani to apply it on her face. How will Kalyani tackle the mischievous move from Nandana? Stay tuned to find out!