In today’s preview of Chembarathi, Kalyani overhears Aravind asking Anand about his injury. 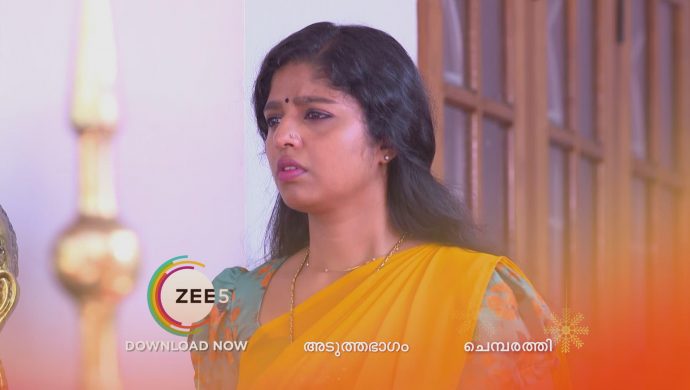 Vilasini confronts Kalyani and starts questioning her intentions behind stealing Anand’s shirt. She continues to demean her and snatches the shirt. Vilasini is angered by Kalyani’s actions and decides to burn the shirt with kerosene. As she lights a match to burn the shirt, Kalyani loses her temper and pushes Vilasini aback. Shocked by Kalyani’s sudden reaction, Vilasini falls on the ground.

Meanwhile, Aravind watches the tussle between the two and comes to Kalyani’s rescue as Vilasini gets back on her feet to slap her. Vilasini starts complaining about how Kalyani, a servant, tried to hurt her. Aravind lies to her about how he didn’t see any of the events. Vilasini is shocked as Aravind refuses to believe her and accuses her of lying about Kalyani hurting her. He further asks Kalyani to go back into the house with the shirt, leaving Vilasini embarrassed.

Later on, Vilasini confronts Das as he returns from work and complains about Kalyani hurting her. The latter gets infuriated as he doesn’t believe Vilasini’s words about his daughter hurting her. He reminds Vilasini about how Kalyani didn’t even react to her trying to kill her in the past and walks off, leaving her frustrated as no one believes her.

Aravind is delighted to see Kalyani stopping Vilasini and is quick to inform Anand about the same. The latter is elated as he listens to Aravind and decides to praise her for gaining the confidence to fight back. Anand calls Kalyani, but finds her disturbed and worried about the consequences of her actions.

In today’s preview of Chembarathi, Kalyani overhears Aravind asking Anand about his injury. Kalyani confronts him later and asks him about Anand and the truth about what happened to him in Mumbai. What will Aravind’s reply be? How will Kalyani react to the truth? Stay tuned to find out.

If you are new to the show, here’s what you need to know. Kalyani is a village girl, who works as a household cook for the wealthy Thrichambarath family. Eventually, she falls in love with Anand who’s the eldest son of Akhilandeshwari. The matriarch of the family, Akhilandeshwari’s notions of wealth and pride keep Kalyani and Anand from disclosing their relationship to the family. The story evolves as Kalyani becomes a part of the evil game played by Akhila’s relatives to destroy the family.