In today’s episode of Chembarathi, Peethamabara Kurup and Sreeni set a trap for Das. Will Das fall into it? Scroll down to read more! 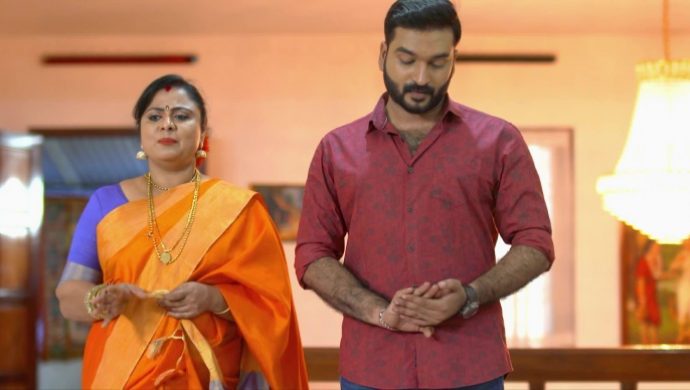 Previously on Chembarathi, Kalyani (Amala Gireeshan) is stopped by Ganga (Haritha Nair) as the former walks back to the kitchen after meeting Anand. Ganga’s questions irritate Kalyani who replies by saying that she has forgiven her several times in the past, only to endure more hurtful things from her. Ganga gets angry and tries to raise her hand to slap Kalyani. Maheshwari intervenes and holds Ganga’s hand.

Meanwhile, a man who introduces himself as Peethambara Kurup, Neeraj’s uncle, visits Das to ask him for Rs 10 lakh as dowry. Later on, Kalyani figures out that Das is in need of money and tries to help him by offering the money. She starts crying when Das tells Aniyankuttan that accepting her money is like death for him.

In today’s episode of Chembarathi, Maheshwari meets Anand and offers to help him in terms of his relationship with Kalyani. She tells him that she will make Akhilandeshwari agree to their marriage. Anand denies the offer and tells her that she should stop ruining peoples’ lives for her personal gain. Maheshwari tells him that she is not going to let his marriage happen and leaves the room.

Later on, Sreenivas meets Peethambara Kurup and it is revealed that the two are working together to trap Das. Sreeni tells Peethamabara that Das would probably steal money from Thrichambarath for the dowry and fall into their trap. Later on, Kalyani goes to the garden and tells her favourite chembarathi flowers about her worries about the future. She tells the flowers about how Das is treating her like a stranger.

Kalyani returns home and finds Das resting on the bed. Das tells her that he is tired of being an ungrateful daughter’s father, which saddens her. Meanwhile, Nandana meets Krishnan at Thrichambarath to thank him for telling Aravind that she was not a part of Maheshwari’s plan. She also apologises for her mother’s rude behaviour. Krishnan consoles her and asks her to live as Aravind’s wife with pride as she is a part of Thrichambarath family.

Later on, Peethamabara Kurup visits Das’ house to collect the money. Kalyani sees Das taking out a bundle of cash from the cupboard and starts to wonder why Das is paying Peethamabara Kurup so much money. Will Kalyani figure out about her dowry? Stay tuned to find out!