In today’s episode of Chembarathi, Ganga insists on taking part in the competition even after Akhila’s constant warnings. 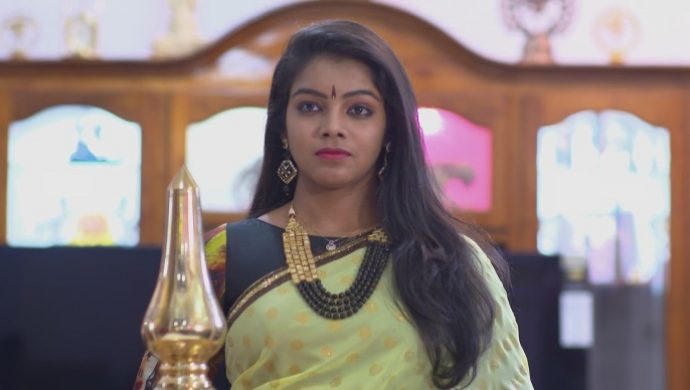 Previously on Chembarathi, Ganga complains to Akhila about Anand bringing Kalyani back to Thrichambarath. Agitated by the same, Akhila yells at Anand. He apologises to her and seeks her blessing in his new venture, namely organising the brand ambassador competition.

As Subramanian and Aravind start discussing Anand’s plan in his room, Akhila barges in. She takes Aravind along with her to feed him and apologises for slapping him earlier. They are in tears as Aravind criticises her for yelling at Anand in front of the whole family. Ganga and Priyanka meet to conspire against Akhila.

In today’s episode of Chembarathi, Priyanka and Ganga continue discussing their plan to take revenge on Akhila. At Thrichambarath, Aravind and Subramanian ridicule Anand’s effort to catch fireflies for Kalyani. Anand catches a handful and gives it to Kalyani. He consoles her when she dissolves into tears over the happenings at mansion. Anand assures her that he will marry her on the same date that Akhila had decided for his marriage to Ganga.

The next day, Akhila receives a phone call that terrifies her and she asks Aravind to switch on the TV. The whole family is shocked to hear the news about a letter that was sent to news channels with Aravind’s signature. According to the letter, the winning prize of the brand ambassador competition is Anand’s hand in marriage. Agitated by the news, Akhila yells at Aravind for his carelessness but he claims to have no clue about the same.

Ganga makes use of the opportunity and tells Akhila that she will take part in the competition and win the prize. The latter grows worried about Anand as Ganga continues to insist. Akhila tells her not to commit anything foolish but later agrees when Ganga shows confidence. Subramanian and Aravind join Anand to discuss the shocking news and take an oath to make Kalyani win the competition.

Chembarathi Special: What Can We Expect From Ganga’s Arrival At Thrichambarath?