In today’s episode of Chembarathi, Anand challenges Ganga to try and win the dance competition. 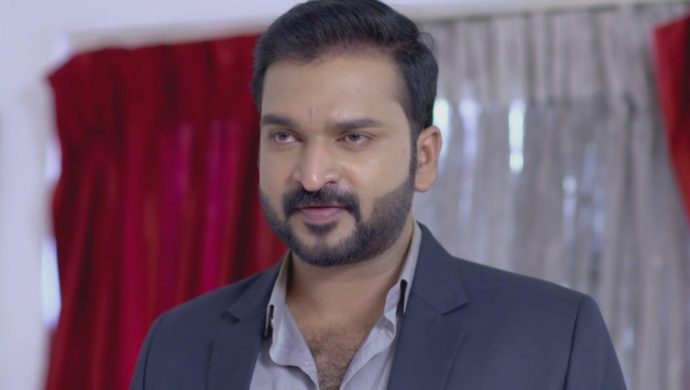 Previously on Chembarathi, Ganga goes to Krishnan’s room and finds him fast asleep. She fixes the poisonous liquid bottle on the AC and leaves the room. Krishnan struggles to breathe in his sleep due to the poison effect and soon falls unconscious. Kalyani tries to enter Krishnan’s room but hides under the staircase when she sees Ganga talking to Vilasini and Jayanthi.

Kalyani is quick to power down the main switch board to shut off the AC. To Ganga’s shock Akhila, Aravind and Anand return from their meeting early. Akhila enters her room and screams when she finds Krishnan lying unconscious. Aravind and Akhila start crying as Krishnan remains unresponsive to their calls.

In today’s episode of Chembarathi, Anand rushes outside to call a doctor for Krishnan. The doctor examines Krishnan and assures the family that he is going to regain his consciousness in a while. He also notices the poison bottle in the AC vent and asks Anand to remove it.

Anand finds Ganga’s ring on the floor when he reaches for the AC vent to get the bottle of poison. The doctor tells the family gathered that Krishnan fell unconscious from the poisonous gas that got out of the AC. Akhila tells Anand that she has never seen the bottle before and suspects someone from the family to have used it to harm Krishnan.

Anand asks the doctor to test the liquid and Krishnan’s blood sample to find out whether it was poisonous or not. Anand tells Akhila that he found the ring and figured out that it was Ganga who entered her room to harm Krishnan. Akhila is agitated by Ganga’s disrespectful actions and takes back the ring from her.

Anand meets Ganga outside the house and warns her for her evil actions against Thrichambarath. He challenges her to try and win the dance competition and reminds her how he had challenged her when Akhila had gifted her with the ring. Anand goes back to his room and finds it empty.  So he goes in search of Kalyani. How will Kalyani get back to Anand’s room? Stay tuned to find out!