In today’s preview of Chembarathi, Vilasini suspects Kalyani of staying in Anand’s room. 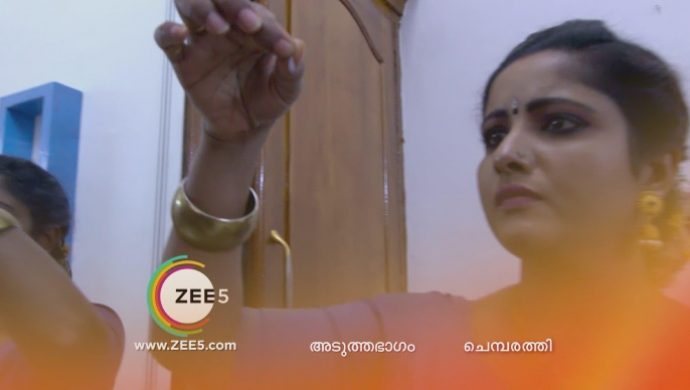 Previously on Chembarathi, Kalyani is shocked to hear about Ganga’s phone conversation with Priyanka and tries to call Anand to inform him of their plans. She gets frustrated because Anand’s phone is unreachable and decides to go to Krishnan’s room and save him. Meanwhile, Ganga goes to Krishnan’s room to find him fast asleep. She fixes the poisonous liquid bottle on the AC and switches it on.

Krishnan starts to groan in his sleep and struggles to breathe due to the effect of the poison. Kalyani tries to enter Krishnan’s room but hides under the staircase when she sees Ganga talking to Vilasini and Jayanthi. Kalyani quickly switches off the main switch to shut the AC.

To Ganga’s shock Akhila, Aravind and Anand come back from their meeting early. Akhila enters her room and screams when she finds Krishnan lying unconscious. Aravind and Akhila start crying as Krishnan remains unresponsive to their calls. Anand rushes out to call a doctor while Akhila and Aravind continue to try and wake up Krishnan.