In today’s episode of Chembarathi, Aravind criticises Akhila for yelling at Anand in front of Ganga. 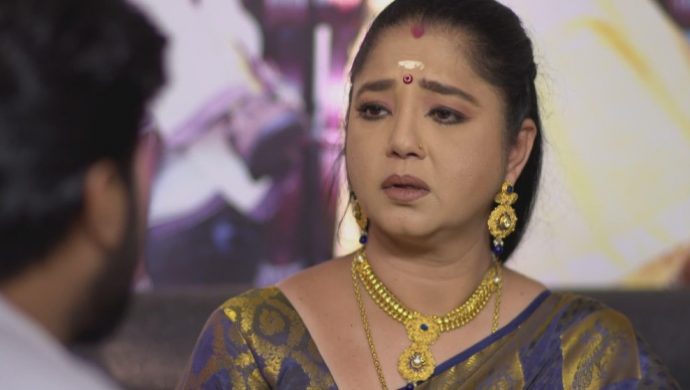 Previously on Chembarathi, Subramanian’s plan with the rotten coconut during the pooja is ruined when Ganga outsmarts him. As they are about to leave for home, Ganga calls Priyanka to inform her about the new developments in Thrichambarath. Meanwhile, Vilasini finds a packet of prasadam in Ganga’s bag with Priyanka’s name mentioned on it.

When the family reach home, Anand and Aravind are surprised to see a press meet happening at Thrichambarath. The brothers are enraged when Ganga reveals that she was the one who called the press so that Akhila can announce Anand’s marriage to her.

Enraged by Ganga’s behaviour, Aravind yells at her for making decisions without consulting Akhila and Krishnan. Akhila slaps Aravind as he demeans Ganga. He warns Akhila about declaring the marriage and reminds her of similar events that happened with Priyanka in the past. Anand lies in the press conference about his company organising a competition to select the best brand ambassador and introduces Kalyani as the face of his company.

In today’s episode of Chembarathi, Ganga complains to Akhila about Anand allowing Kalyani to enter the house and introducing her as the brand ambassador. Agitated by her complaints, Akhila rushes outside her room to see Anand and Aravind talking to Kalyani. Infuriated by the same, Akhila yells at Anand, asking reasons for his arrogance. The latter apologises to his mother for not following her instructions. He also seeks her blessings for the new venture of organising the brand ambassador competition.

Subramanian and Aravind visit Anand’s room to review the situation. Anand tells them about Das’s plan to send Kalyani back to their village. As they connect the dots, they understand Anand’s hidden motive behind taking up the brand ambassador competition. They continue to plan their next move and are surprised when Akhila barges in looking for Aravind.

Akhila starts crying as she feeds Aravind and apologises for slapping him earlier. Both of them weep as she explains her affection for him. Aravind tells her that it was unfair on her part to criticise Anand in front of Ganga and the whole family. Akhila starts contemplating her decision and continues sobbing as he leaves.

Meanwhile Ganga meets Priyanka to update her on the events happening at Thrichambarath. She tells her about Aravind ruining her plan by stopping Akhila from announcing Anand’s marriage at the press meeting. Ganga further starts explaining her evil plan to bring down Akhila to her knees. What will be Ganga’s next move against Akhila? Stay tuned to find out!