In today’s episode of Chembarathi, Aravind gets Ganga’s father drunk to learn about his true motives. Read the full update here. 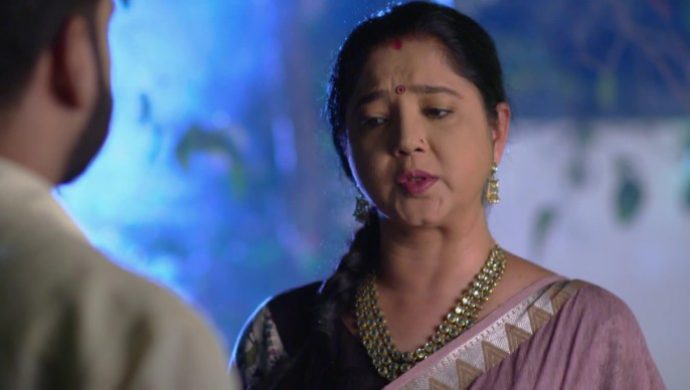 Previously on Chembarathi, Das slaps Kalyani for embracing Anand and revealing her love for him. He tells her that he is cursed to have a daughter like her and locks himself in the house. Kalyani starts crying out loud when Das starts tying a noose to hang himself.

Anand saves Das and consoles him by telling him that Kalyani was intoxicated by Vilasini. He promises Das that Kalyani’s marriage won’t be ruined. Later at Thrichambarath, Krishnan tries to console Akhila when she tells him that she is disheartened by Kalyani’s actions. Both realise that Anand is hiding something from them and they plan to discuss the same with him.

Aravind and Krishnan get anxious about Anand’s reply when Akhila asks if is he is hiding something from her. Aravind waits for Anand to reveal his feelings for Kalyani. Instead, the latter asks for Akhila’s permission to allow Kalyani to be present in Thrichambarath.

In today’s episode of Chembarathi, Anand tells Akhila that allowing Kalyani back into Thrichambarath will make him happy. The latter agrees to his demands and reminds him that she is going against Guruji’s warnings about Kalyani. When Akhila goes back to Thrichambarath, Krishnan thanks Anand for not revealing his feelings for Kalyani.

Aravind gets angry as Anand didn’t reveal his love for Kalyani when he got the chance and yells at him for the same. Anand tells him that hiding his feelings was the only way to save his mother from harming herself. Aravind gets irritated by Anand’s reply and goes back to the house.

Anand is quick to call Kalyani and asks her to come outside her house. He tells her about how Akhilandeshwari has agreed to let her work in Thrichambarath after his requests. Kalyani is pleased by the news and runs back to her house to pray to her mother’s picture.

Later at night, Subramanian is surprised to see Aravind preparing drinks and warns him of Akhila finding out. Aravind tells him about his plan to get Ganga’s father drunk and understand his true motives. Meanwhile, Anand thinks of his moments with Kalyani and sleeps in his room.

Ganga’s father gets drunk and tells Subramanian and Aravind that he has another son in Mumbai. Aravind records the conversation and runs to Anand to inform him when Ganga’s father falls asleep on the chair. What will be Anand’s reaction? Stay tuned to find out!

Take This Quiz To Know Which Character From Pookalam Varavayi You Are!