In today's preview of Chembarathi, Kalyani overhears Ganga's telephonic conversation and tries to figure out whom she is talking to. 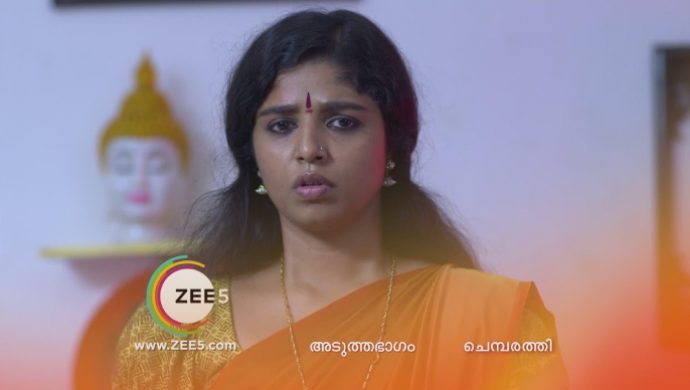 Previously on Chembarathi, Subramanian is shocked when Anand calls out Kalyani when the doctor comes.  Jayanthi tells Vilasini that the doctor is in Anand’s room to tend to Kalyani because she must have fallen and gotten hurt.

As the doctor prepares to leave, the latter asks her who was there in Anand’s room. The doctor tells her that the treatment was for Subramanian and leaves. Vilasini starts suspecting Anand of hiding something when Jayanthi tells her that Subramanian is pretending to limp.

Aravind gets irritated by Maheshwari’s rude comments about his family and lashes out at her. He reminds her that Nandana was treated with respect even when they got drunk together and it was her fault that she left her daughter at Thrichambarath before she got married to him.

Aravind adds that Nandana left Thrichambarath because she was greedy and wanted all of his wealth for herself. Vilasini gets elated at the argument between Aravind and Maheshwari. Akhila and Krishnan are shocked when their son asks Maheshwari to make her daughter apologise to his parents before coming back.

In today’s preview of Chembarathi, Ganga calls Priyanka to tell her that Anand and Akhila are not there at Thrichambarath. Kalyani overhears the conversation from Anand’s room and tries to figure out who Ganga is talking to. Priyanka is elated by the information and tells her that this is a perfect situation for her. What is Priyanka planning? Stay tuned to find out!