Has Akhila arrived upon a decision regarding Chandrapratap and Kalyani? Read on to find out. 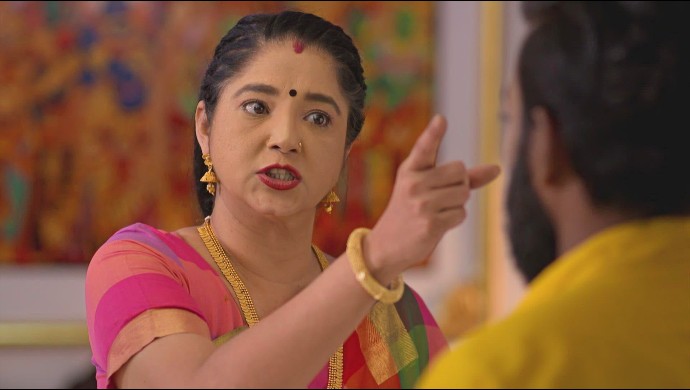 In the previous episode, we saw Chandrapratap come home drunk and almost insensible after narrowly escaping a beating on the road from the public after he tried to misbehave with Sujatha. At home, he lies drunk and passed out on the sofa in the living room and much to Vilasini’s horror, Akhilandeshwari spots him in that state. Dasan then regales her with what he saw on the road and Chandrapratap’s true colours. Coldly furious, Akhila tells Dasan and Anand that she knows what is to be done with Chandrapratap and tells that people should no longer concern themselves with him. Later Vilasini and Jayanthi force buttermilk into Chandrapratap to sober him up. Anand and Aravind are, meanwhile, happy because as their plan to kick out Chandrapratap and send him back to Mumbai seems to be finally working.

Chandrapratap wakes up on a strange bed and is surprised to find Vilasini and Jayanthi sitting there. They narrate all the things that happened since he got drunk. He is dismayed to realise that he may not be getting married to Kalyani now. Akhilandeshwari, meanwhile, confides to Krishnan that she is in a turmoil over the Chandrapratap issue. On the one hand, if she cancels the wedding of Chandrapratap and Kalyani, she will be going back on her word and Akhilandeshwari never breaks her promise. On the other hand, if she stick to her promise, she may be ruining Kalyani’s life. Later when she calls the family to assemble in the living, Chandrapratap falls at her feet and begs her forgiveness. He says that he never voluntarily drank and that his friends had thrown a bachelor party in a bar and mixed liquor in his cold drink. Akhilandeshwari looks at him in disdain and slaps him. She then tells Kalyani that whether she marries Chandrapratap or not is entirely up to her and that she, Akhila, will support Kalyani’s decision.

To everyone’s shock, Kalyani says that she will marry Chandrapratap. Dismayed, Krishnan asks her to reconsider, saying that this man has a drinking problem. Kalyani retorts that if every woman looked for a teetotaller as a husband, most Indian women would remain single. Akhilandeshwari praises her saying that her decision to marry Chandrapratap despite his shortcomings and wanting to change him reflects Kalyani’s own inner self confidence. Anand, on the other hand, is upset and leaves the room.

If you missed the last few episodes, here’s what you need to know. Akhilandeshwari, the matriarch of the wealthy Thiruchambarath family does not approve of the growing bond between her son Anand and Kalyani, the household cook. She arranges for Kalyani to be married to a man named Chandrapratap. Meanwhile, Anand’s ex-fiance kidnaps Kalyani to wreak revenge upon the family. Kalyani is rescued and Akhila asks her to stay at their mansion instead of the outhouse until her wedding in order to protect her from Priyanka’s plans.

For more such entertainment and drama, watch Alliyambal, the love story of a village teacher and a martial arts instructor, now streaming on ZEE5.