In today's episode of Chembarathi, Akhila tells Krishnan that she suspects Anand of hiding something. Read the full update here. 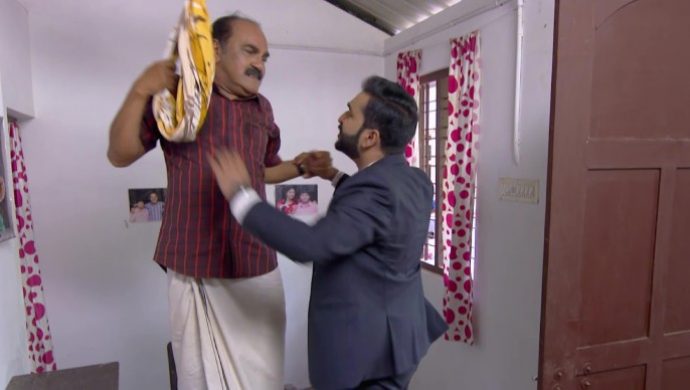 Previously on Chembarathi, Kalyani reveals her love for Anand in front of the family during the ceremony. Angered by Kalyani embracing Anand, Akhila pushes her and tries to slap her but hits Ganga instead. Anand tries to save Kalyani by telling Akhila that she was given spiked sweets to eat by Vilasini.

Akhila slaps Vilasini when Anand shows a video of her mixing the chemical powder in sweets. Vilasini remembers Priyanka’s threats to kill her if she were to betray Ganga and tells Akhila that she spiked the sweets to make Kalyani leave Thrichambarath.

Meanwhile, Ganga requests Akhila to make Kalyani stay in Thrichambarath and watch her wear the ancestral jewellery. Kalyani starts crying and tries to leave the house but is stopped by Ganga who demeans her by calling her a servant.

In today’s episode of Chembarathi, Das slaps Kalyani and tells her that he is cursed to have a daughter like her. Kalyani tries to tell him that she was trapped by Vilasini but he continues to blame her for embarrassing him. He locks himself inside the house and starts tying a noose on the ceiling to kill himself.

Anand is quick to arrive as he hears Kalyani’s cry for help. He breaks the door open and saves Das from hanging himself. He explains to him how Kalyani is not the one to blame because she was trapped by Vilasini. When Das tells Anand that he doesn’t want to live anymore, the latter promises him that he will make sure that Kalyani’s marriage will take place.

Later at Thrichambarath, Krishnan tries to console Akhila when she tells him that she is disheartened by Kalyani’s actions. Both realise that Anand is hiding something from them and they plan to discuss the same with him. Akhila and Krishnan approach Anand while he is talking to Aravind about the events at Kalyani’s house.

Aravind and Krishnan get anxious about Anand’s reply when Akhila asks if is he is hiding something from her. Aravind waits for Anand to reveal his feelings for Kalyani but the latter asks for Akhila’s permission to allow Kalyani to be present in Thrichambarath while he is marrying Ganga. What is Anand planning? Stay tuned to find out!