In today’s preview of Chembarathi, Das tells Kalyani that he is cursed for having a daughter like her and locks himself inside the house. 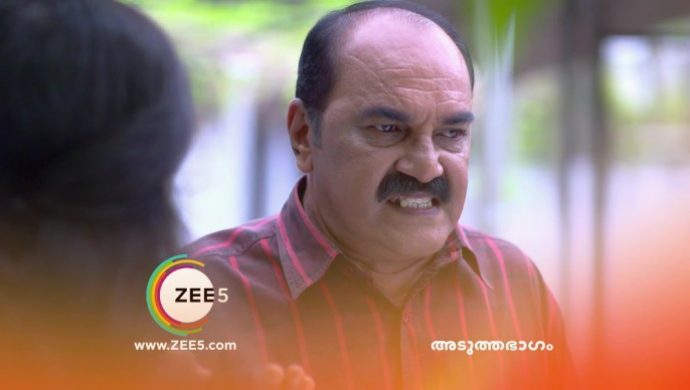 Previously on Chembarathi, Kalyani in an intoxicated state reveals her love for Anand in front of the family. Angered by Kalyani’s disrespectful behaviour Akhila pushes her and tries to slap her but hits Ganga instead. Anand saves Kalyani by telling Akhila that she was given spiked sweets to eat by Vilasini.

When Anand shows a video of Vilasini mixing the chemical powder in sweets, Akhila gets agitated and slaps the latter. She also asks Vilasini her intentions behind hurting Kalyani. Vilasini remembers Priyanka’s threats to kill her if she were to betray Ganga and tells Akhila that she spiked the sweets to make Kalyani leave Thrichambarath.

Meanwhile, Ganga requests Akhila to make Kalyani stay in Thrichambarath and watch her wear the ancestral jewellery. Kalyani breaks down in sadness and is stopped by Ganga who demeans her by calling her a servant. Ganga also tells her that she will never be able to marry Anand.

In today’s preview of Chembarathi, Das tells Kalyani that he is cursed for having a daughter like her and tells her that he is going to commit suicide. Das locks himself inside the house and ties a noose on the ceiling despite Kalyani’s efforts to calm him down. Will Kalyani be able to save Das? Stay tuned to find out!