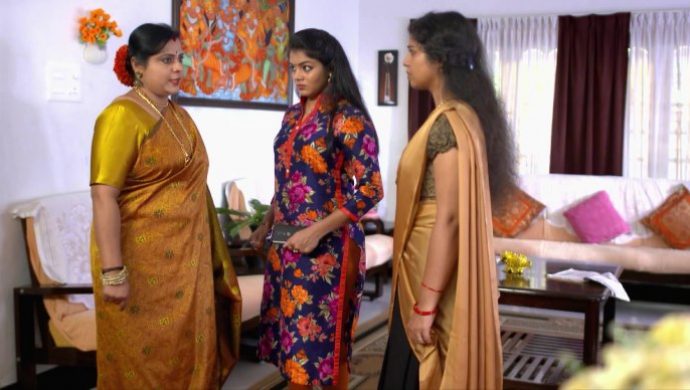 Previously on Chembarathi, Aravind (Prabhin) yells at Nandana (Blessy Kurien) for Maheshwari’s move to partition Thrichambarath. Nandana begins to cry when Aravind tells her that Anand (Stebin Jacob) offered his share of properties for their happiness. Aravind agrees to let Maheshwari stay in Thrichambarath as he calms down after seeing Nandana cry.

Krishnan gets infuriated by Vilasini’s suggestion to partition the properties between him and his brother Sahadevan. Vilasini leaves in embarrassment when Krishnan declines her request. Later on, Anand meets Kalyani in the garden to tell warn her of Maheshwari’s plans. Ganga watches the couple chit-chatting in the garden and gets infuriated as Anand gets closer to Kalyani.

In today’s episode of Chembarathi, Ganga stops Kalyani as she walks back to the kitchen after the meeting. Angered by her questions, Kalyani tells Ganga that she has forgiven her several times before, only to endure more hurtful things from her. Ganga gets infuriated by Kalyani’s reply and raises her hand to slap her. Maheshwari takes a hold of Ganga’s hand and asks Kalyani to leave for work.

Maheshwari tells Ganga that she doesn’t like her engagement to Anand and that she will try and stop it. She also tells her that she should know her place as Anand and Kalyani would probably marry each other soon. Meanwhile, Das gets a visitor who introduces himself as Peethambara Kurup, Neeraj’s uncle. Das is shocked when the man asks for 10 lakh rupees in Dowry for the upcoming marriage as Neeraj’s parents are embarrassed to ask about the same.

Das agrees to pay the money but gets worried about the sudden demand from Neeraj’s family. Back at Thrichambarath, Maheshwari tells Kalyani that she will help her in becoming Anand’s bride. Kalyani is confused when she tells her that she expects her to help her also in return. Kalyani gets worried about Maheshwari’s plan and goes back to work.

Back at Das’s house, Aniyankuttan is worried when Das tells him about Naeeraj’s parents asking for dowry. Kalyani understands that Das is in need of money and offers her brand ambassador salary to help. When Aniyankuttan approaches Das with Kalyani’s passbook and cheque, Das tells him that accepting her money is death for him. Kalyani listens to Das’s conversation and starts crying in the next room. Will Das accept Kalyani’s money? Stay tuned to find out!

Chembarathi 25 June 2020 Preview: Ganga Gets Infuriated When She Sees Anand And…