In today’s preview of Chembarathi, Kalyani gets angry at Ganga and yells at her for her rude behaviour. Scroll down to see what happens in the show. 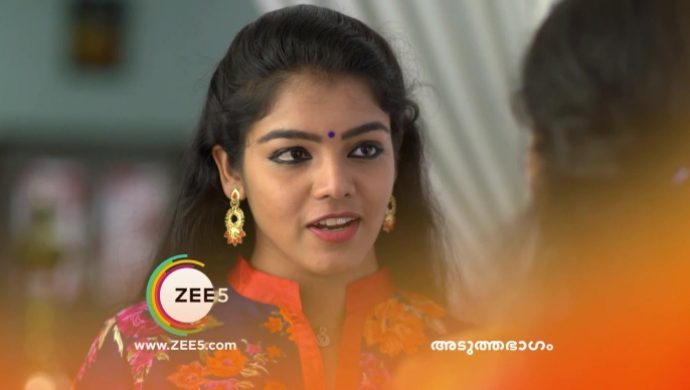 Previously on Chembarathi, Aravind (Prabhin) yells at Nandana (Blessy Kurien) for her mother’s move to divide Thrichambarath’s assets. Nandana begins to cry when Aravind tells her that Anand (Stebin Jacob) offered his share of properties for their happiness. He calms down after looking at Nandana’s tears and agrees to let Maheshwari stay in Thrichambarath.

Vilasini meets Krishnan the next day and tells him that the partition should be between him and his brother, Sahadevan. Krishnan is infuriated by Vilasini’s suggestion and lashes out at her. Vilasini leaves in embarrassment when Krishnan declines her request. Meanwhile, Nandana tells Maheshwari that it was unnecessary of her to ask for partition. Nandana gets worried when Maheshwari tells her that she will divide the family into two groups before Anand’s marriage.

Anand meets Kalyani in the garden to tell her about Maheshwari’s plans regarding Thrichambarath. The two share a romantic moment when Anand tells her that he will marry her with Akhila’s permission in due time. Ganga watches the couple talking in the garden and gets infuriated as Anand gets closer to Kalyani.

In today’s preview of Chembarathi, an angry Kalyani tells Ganga that she has forgiven her several times, only to endure more hurtful things from her. Ganga gets infuriated by Kalyani’s reply and raises her hand to slap her. Then suddenly someone gets hold of Ganga’s hand and stops her from slapping Kalyani. Who stopped Ganga? Watch today’s episode of Chembarathi to find out!

Chembarathi 24 June 2020 Preview: Kalyani Is Caught By Ganga While Fixing The…