In today's episode of Chembarathi, Vilasini and Jayanthi suspect Anand of hiding something when they find Subramanian pretending to limp. 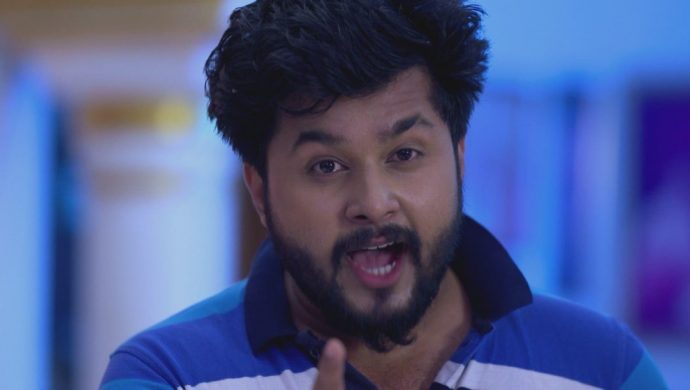 Previously on Chembarathi, Kalyani trips and falls off a sofa while watching Ganga practice with her dance teacher. Jayanthi is quick to notice the sound of Kalyani falling and informs Vilasini about the same. Kalyani lies unconscious while the duo tries to find a way to break into Anand’s room.

Anand gets an instinctive feeling that something unfortunate has happened to Kalyani. He drives back to Thrichambarath to find Vilasini and Jayanthi in front of his room. He yells at both of them for trying to break into his room and asks them to leave. Upon entering his room, he is shocked to find Kalyani lying on the floor unconscious.

As the doctor prepares to leave, Vilasini asks her who was there in Anand’s room. The doctor tells her that the treatment was for Subramanian and leaves. Vilasini starts suspecting Anand of hiding something when Jayanthi tells her that Subramanian is pretending to limp.

Later at night, Akhila and Krishnan are surprised to see Nandana’s mother Maheshwari walking into Thrichambarath. Maheshwari starts questioning them for not enquiring about Nandana after she left Thrichambarath. She yells at them for their false pride and tells them that she didn’t marry off Nandana to Aravind to make her sacrifice her life for the family. She calls out Aravind from his room and tells him how he is not a man for denying physical obligations to his wife because he is loyal to his family.

Aravind gets irritated by Maheshwari’s rude comments about his parents and lashes out at her. He tells her that Nandana was treated with respect even when they got drunk together. He also tells Maheshwari that she is not a good parent because she left Nandana at Thrichambarath before she got married to him. Aravind adds that Nandana left Thrichambarath because she was greedy and wanted all of his wealth for herself.

Vilasini gets happy when Akhila is seen disturbed by the argument between Aravind and Maheshwari. Aravind asks Maheshwari not to come back to Thrichambarath before her daughter apologises to Akhila and Krishnan for her rude comments. What will Maheshwari’s reply to Aravind be? Stay tuned to find out!