In today’s preview of Chembarathi, Das confronts Kalyani and asks her about her late-night calls. 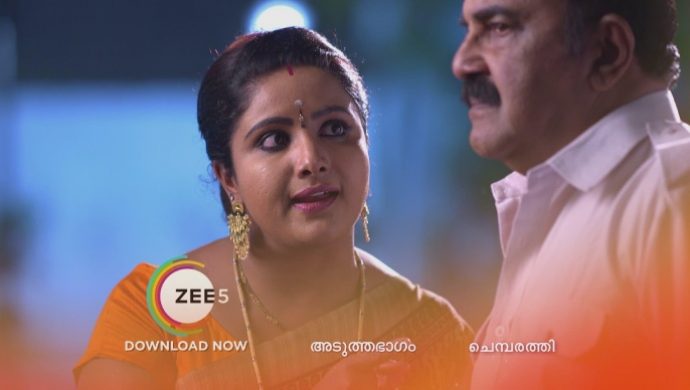 Previously on Chembarathi, Anand’s conversation with Kalyani gets interrupted by Vilasini as she starts intimidating her. Anand overhears the conversation between the two on his phone and calls Vilasini. When she picks up the call, Anand asks her to handover the phone to Kalyani, leaving Vilasini embarrassed.

Frustrated with Anand’s actions, Vilasini starts thinking about ways to hurt Kalyani. Jayanthi walks in suddenly, praising Kalyani’s culinary skills and her comments infuriates Vilasini. She starts slapping the latter and goes on to choke her. Hearing the commotion, Nandana walks in to save Jayanthi.

Vilasini tells Nandana about the events with Kalyani making Nandana tremble with Anger. Nandana and Vilasini starts scheming ways to further hurt Kalyani as they feel challenged by Anand.

Meanwhile Kalyani calls Anand again and requests him to video call her. He asks Subramanian for help to cover his bandages before calling her. As Subramanian walks out, Anand wears a handkerchief on his head and calls Kalyani. She is intrigued by Anand’s new found interest in style and the couple talks for long. Subramanian tries to steal a woman’s cap but gets beaten up by a crowd. When Anand returns to his bed, he finds Subramanian hiding under his blanket, thus making him laugh at his clumsy ways.

In today’s preview of Chembarathi, Vilasini tells Das about Kalyani talking on the phone late at night. Embarrassed by Vilasini’s complaints about his daughter, Das confronts Kalyani and question her about the same. Kalyani is speechless as she is suddenly bombarded with his questions. What will Kalyani’s answer be? Will Das finally learn about Kalyani’s relationship with Anand? Stay tuned to find out!

If you are new to the show, here’s what you need to know. Kalyani is a village girl, who works as a household cook for the wealthy Thrichambarath family. Eventually, she falls in love with Anand who’s the eldest son of Akhilandeshwari. The matriarch of the family, Akhilandeshwari’s notions of wealth and pride keep Kalyani and Anand from disclosing their relationship to the family. The story evolves as Kalyani becomes a part of the evil game played by Akhila’s relatives to destroy the family.

For more entertainment and drama watch ‘Sathya Enna Penkutty’, streaming only on ZEE5.

This Rendition From Sa Re Ga Ma Pa Keralam Contestants Is The Best Christmas Carol Ever!