Kalyani returns from the temple only to find Akhila walking towards her angrily and she slaps her. 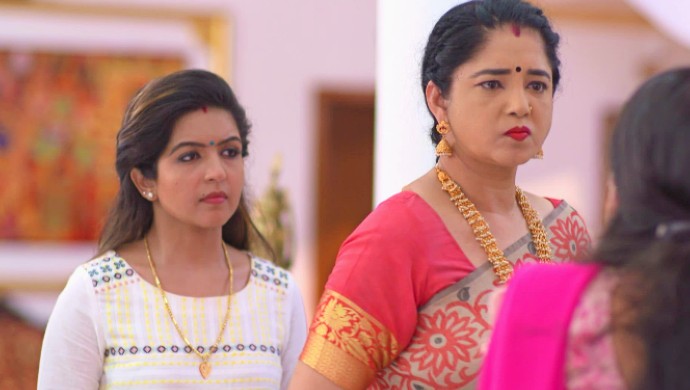 In the previous episode we saw Kalyani running into Anand’s arms at the temple for a loving embrace. Then she gets shocked at what she’s done and runs out of there. Vilasini sees this and also overhears Anand and Aravind discussing a way to send Chandrapratap packing. Meanwhile Chandrapratap gets drunk on the road and misbehaves with Sujatha for which the locals around start beating him up. Anand, who happened to be passing by intervenes and dumps the drunk Chandrapratap into his car. Then he spots Dasan who had been watching the entire scene unfold and is quite upset.

The current episode opens with Kalyani returning to the house after running away from the temple. She walks into the living room to find Akhila striding angrily towards her. Kalyani gets scared wondering if Akhila knows about what happened at the temple. Much to her shock, Akhila walks up to her and slaps her hard. Even as Kalyani fears the worst, Akhila berates her for putting her life at risk by going to the temple when she was specifically asked not to leave the mansion. Meanwhile Anand brings the drunk Chandrapratap home and Arvind suggests that its best if the drunk man is allowed to walk in and catch everybody’s attention. They realise this would be the best way to send Chandrapratap packing. So they let him go and he walks in and starts creating a scene. Vilasini is appalled and as she starts to scold him, Akhila walks in and is coldly enraged by the sight of Chandrapratap lying drunk on the sofa. Dasan then comes forward and narrates what he saw. Akhila then says she has arrived at a decision regarding Chandrapratap and nobody need hang around there looking after him. She walks out of the room. Vilasini and Jayanthi later try to revive Chandrapratap,

Did You Know That Akhilandeshwari Of Chembarathi Acted In A Hindi Film With Jackie Shroff?