In today’s episode of Chembarathi, Akhila slaps Vilasini when she learns that she intoxicated Kalyani. Read the full update here. 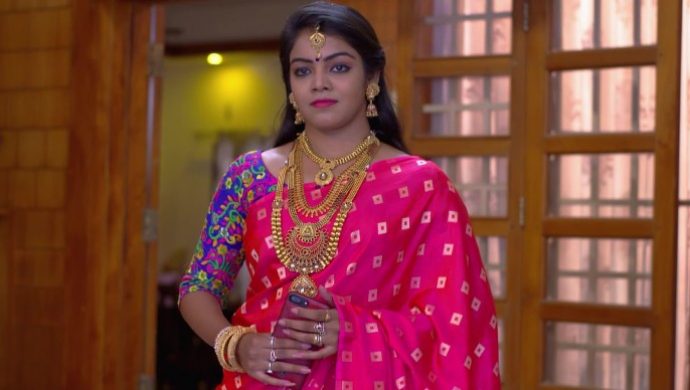 Jayanthi goes to Kalyani and tries to make her drink the spiked juice but her plan fails when Ganga’s father drinks it and yells at Jayanthi for giving the juice to Kalyani.  Vilasini makes Kalyani eat the spiked sweets before dancing and waits for the chemicals to take effect. Shortly afterwards, Kalyani feels dizzy from the spiked sweets and starts smiling at Anand who is in the room.

In today’s episode of Chembarathi, intoxicated from the spiked sweets Kalyani reveals her love for Anand in front of everyone gathered for the ceremony. Akhilandeshwari pushes Kalyani away from Anand as the latter starts embracing him and tries to slap her but hits Ganga instead.

As she starts yelling at Kalyani for her disrespectful actions, Anand asks Akhila to stop and shows her a video of Vilasini adding the chemicals to the sweets in the kitchen. Akhila gets angry by Vilasini’s actions, she slaps her and asks her why she is hurting Kalyani. Vilasini is reminded of Priyanka’s threats to kill her if she were to betray Ganga and tells the family gathered that she was planning on making Kalyani leave Thrichambarath.

Akhila asks Das to take Kalyani back to her house but Ganga remembers Anand’s challenge and requests her to make Kalyani stay for the ceremony. Kalyani starts crying when Akhila asks Ganga to wear the ancestral jewellery during the ceremony. When Kalyani runs outside, Ganga follows her and tells her that she will never be Anand’s wife and calls her a servant. Kalyani weeps and runs back to her house. Who will marry Anand? Stay tuned to find out!