In today’s preview of Chembarathi, the spiked sweets make Kalyani reveal her love for Anand shocking the family members gathered at the event. 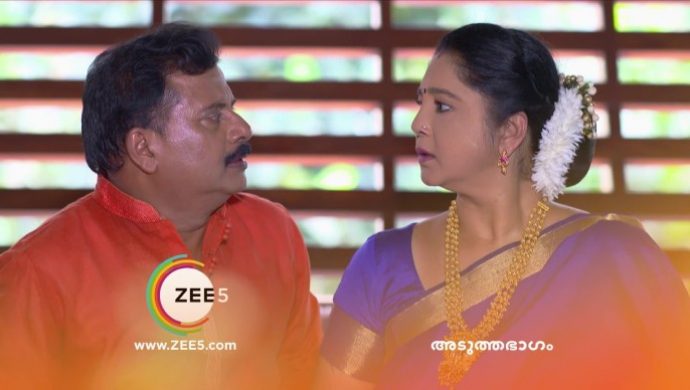 Previously on Chembarathi, Anand tells Subramanian and Aravind about Ganga planning to trap Kalyani during the ceremony. He tells Subramanian about how Ganga had tried the intoxicating chemical powder on Stella. Meanwhile, Ganga and Vilasini think of a way to make Kalyani drink the spiked juice and asks Jayanthi to do the same.

Jayanthi goes to Kalyani and tries to make her drink the spiked juice even after the latter resists it. Ganga’s father drinks it instead and yells at Jayanthi for giving the juice to Kalyani. Ganga’s father starts talking to himself and reveals that he is a rented actor posing as her father.

Later on, Kalyani and Ganga are invited by Akhila and Krishnan to do a dance recital for the guests before the ceremony. Vilasini makes Kalyani eat the spiked sweets before dancing and waits for the chemicals to begin its effect. Shortly afterwards, Kalyani feels dizzy and starts smiling at Anand who is in the room.

In today’s preview of Chembarathi, an intoxicated Kalyani, reveals her love for Anand in front of everyone gathered for the ceremony. As she starts embracing him, Akhilandeshwari pushes her back and tries to slap her, but hits Ganga instead when Kalyani falls down. What will happen next? Stay tuned to find out!

Birthday Special: These Pictures Are Proof That Nyla Usha Can Rock Any Outfit