In today’s episode of Chembarathi, Maheshwari tells Nandana that her plan is to divide Thrichambarath in two. Scroll down to read more! 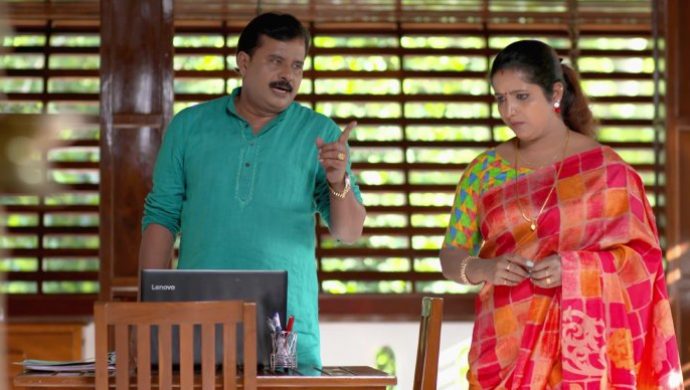 Previously on Chembarathi, Kalyani (Amala Gireeshan) goes to Ganga’s (Haritha Nair) room to fix the microphone and help Anand (Stebin Jacob) to know her plans. As she is about to fix the device under the stool, Ganga walks in. Ganga uses the opportunity to mock Kalyani and asks her to clean the room. Later on, Anand tells Subramanian that he is planning to reveal Ganga’s true identity to Akhila with the proof before their marriage takes place.

Vilasini and Ganga meet Sreenivas to tell him about Maheshwari’s partition plan. Sreenivas advises Vilasini to ask for her share of properties, as it should be divided between Krishnan and his brother. Aravind meets Maheshwari and threatens to kill her if she ever tries to hurt his family again.

He warns Maheshwari again when she tells him to be prepared for a fight and leaves to meet his wife. Nandana acts innocent when Aravind lashes out at her.

In today’s episode of Chembarathi, Aravind yells at Nandana for inviting her mother to Thrichambarath. He tells her that he will kill her mother if her plan is against the happiness of their family. Nandana begins to cry when Aravind tells her that Anand offered his share of properties for their happiness. He calms down after looking at Nandana’s tears and agrees to let Maheshwari stay in Thrichambarath.

The next day, Krishnan gets disturbed as he recalls about Maheshwari’s request for partition. Vilasini comes to meet Krishnan and tells him that the partition should be between him and his brother, Sahadevan. Krishnan is infuriated by Vilasini’s suggestion and lashes out at her. Vilasini leaves in embarrassment when Krishnan declines her request.

Later on, Anand gets a notification from the microphone fixed in Ganga’s room as she gets a call. Anand tries to figure out the person whom Ganga is talking to, but fails as she doesn’t disclose the details. Meanwhile, Nandana tells Maheshwari that it was unnecessary of her to ask for partition. Nandana gets worried when Maheshwari tells her that she will divide the family in two before Anand’s marriage.

Later that day, Anand meets Kalyani in the garden to warn her about Maheshwari’s plans. The two share a romantic moment when Anand tells her that he will marry her with Akhila’s permission in due time.  Ganga watches the couple chit-chatting in the garden and gets infuriated as Anand gets closer to Kalyani. What will be Ganga’s reaction? Stay tuned to find out!

Mammootty Explores His Love For Photography. See These Beautiful Snaps From The Actor