In today’s episode of Chembarathi, Aravind plans with Anand and Subramanian to ruin Ganga’s pooja at the temple. 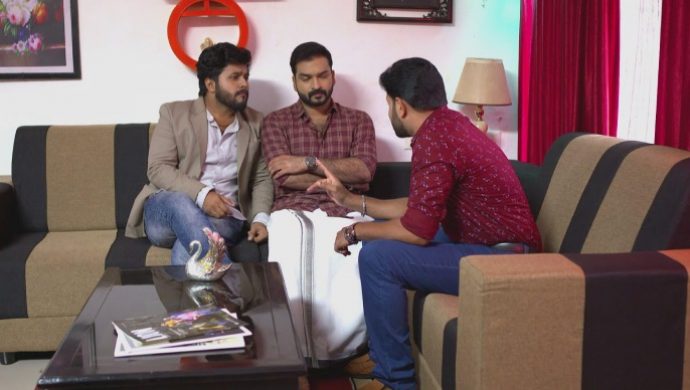 Previously on Chembarathi, Kalyani is asked to leave Thrichambarath as the milk changes its colour during the pooja. She begs Akhila not to let her go, but Akhila stays adamant in her decision. Vilasini finds the events surrounding the pooja as a perfect opportunity to demean Kalyani, but gets slapped by Akhila. Krishnan criticises Akhila for her decision regarding Kalyani and reminds her of the sacrifices she had made for the family in the past.

In today’s episode, as Krishnan’s conversation with Akhila continues, he apologises to her for being extremely critical of her decisions. Akhila starts to regret her statements regarding Kalyani as Krishnan leaves. Meanwhile Nandana and Aravind fight over Kalyani’s relationship with Anand. The latter is irritated as Nandana tries to demean his brother’s relationship.

Ganga is seen talking to someone over the phone about her plans for Thrichambarath. Just when she is about to reveal her suspicious motives, Krishnan interrupts her. He talks to her about the traditions in Thrichambarath and explains the many responsibilities expected of her by the family as she is going to become the next matriarch. He also warns her of the consequences of breaking the family’s trust.

The next day, Das tells Kalyani to leave after he learns about Akhila’s order. He asks her to pack her belongings and reprimands Aniyankuttan for defending his sister. Kalyani starts crying as Das blames her for being a bad omen for Thrichambarath. Aravind eavesdrops on Akhila’s conversation with Ganga as she invites her for a pooja at the temple. He plans with Anand and Subramanian to create a bad omen during the pooja to make Akhila dislike Ganga. Will their plan against Ganga work? Stay tuned to find out.