In today’s preview of Chembarathi, Kalyani is saddened as Das asks her to leave the house. 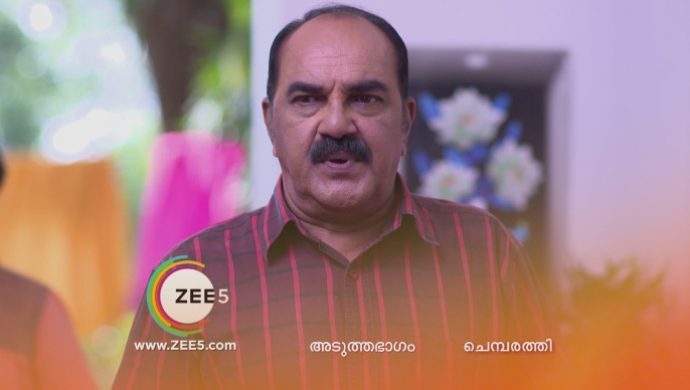 Previously on Chembarathi, Akhilandeshwari shocks everyone gathered for the pooja when she banishes Kalyani from Thrichambarath. Despite Aravind and Krishnan trying to persuade her otherwise, Akhila stays adamant in her decision. Devastated at Akhila’s orders, Kalyani runs out crying.

Anand finds her crying next to her Chembarathi flowers and tries to console her. Vilasini is elated by the events and decides that this would be a perfect opportunity to make a move against Kalyani. She tells Akhila about Kalyani and Anand but gets slapped by her for demeaning Kalyani.

Akhila is seen contemplating on her decision in asking Kalyani to leave Thrichambarath. Krishnan tells her that she was being unfair in her decision and warns her about the consequences of her actions. He reminds her of the many sacrifices Kalyani had made for the family in the past. As Akhila starts to regret her decision, Krishnan criticises her for not consulting Anand about matters pertaining to his own life.

In today’s preview of Chembarathi, Krishnan is seen talking to Ganga about Thrichambarath and its wealth. He warns her of the consequences of breaking the family’s trust. Das confronts Kalyani and asks her to leave Thrichambarath. What made Das take up such a decision? Stay tuned to find out!