Chembarathi 25 February 2020 Written Update: Anand Comes Back To Save Kalyani

In today’s episode of Chembarathi, Anand stops Vilasini and Jayanthi from trying to enter his room. 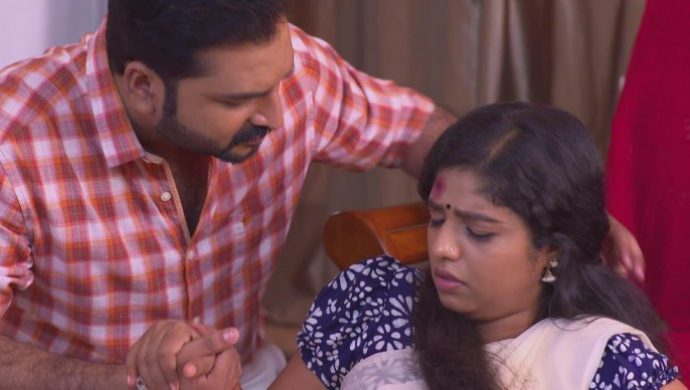 Previously on Chembarathi, Anand asks Kalyani to stay alert and makes her lock his room from inside. As he is about to leave, he sees Jayanthi running upstairs to sneak into his room. He stops her and gives her the badminton racquet she wanted from his room.

Jayanthi tells Vilasini about how she suspects Anand of hiding Kalyani in his room. The latter asks her to stop overthinking and asks her to stay calm before Akhila throws her out of Thrichambarath. Krishnan consoles Aravind as he is disheartened by Nandana leaving Thrichambarath.

Krishnan tells him that he can only lead a happy married life if he is willing to make compromises. He further asks Aravind to try and bring Nandana back. Vilasini and Jayanthi are surprised to see a dance teacher come looking for Ganga. Akhila invites the dance teacher to stay with the family while training Ganga.

In today’s episode of Chembarathi, Ganga starts her dance practice for the competition with her new teacher. Kalyani who was watching dance videos gets intrigued by Ganga’s dance session and tries to watch and learn from her. She climbs on a sofa to watch Ganga practice but trips and falls on the floor.

Jayanthi is quick to notice the sound of Kalyani falling and informs Vilasini about the same. Kalyani lies unconscious while the duo tries to find a way to break into Anand’s room. Vilasini asks Jayanthi to fetch the spare keys and tries one key after the other to open the door.

Meanwhile, Anand gets an instinctive feeling that something unfortunate happened to Kalyani. He drives back to Thrichambarath to find Vilasini and Jayanthi in front of his room. He yells at Vilasini to stop her from entering his room. She tells him how she was only trying to check after the loud noise from his room. Anand asks them both to leave before entering his room and is shocked to find Kalyani lying on the floor unconscious.

Anand takes a flower vase to hit Subramanian’s leg and bruise him. While Subramanian groans in pain Anand calls a doctor to Thrichambarath. Vilasini and Jayanthi are surprised to see a doctor walk into the house. Will Vilasini find out that Anand is hiding Kalyani? Stay tuned to find out!