In today's preview for Chembarathi, Kalyani practices for the competition watching Ganga train with her dance teacher. 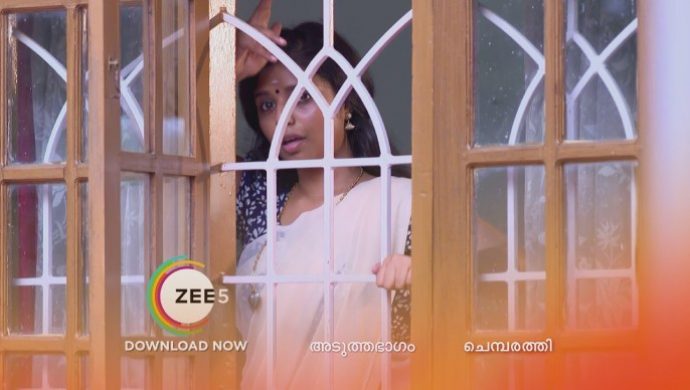 Previously on Chembarathi, Anand lies to Subramanian about forgetting his wallet in his room and goes to meet Kalyani. He asks her to stay alert and makes her lock the room from inside. As he is about to leave for the office, he sees Jayanthi running upstairs and catches her trying to sneak into his room.

Jayanthi lies to Anand about trying to enter his room to take his badminton racquet. The latter gets inside and asks her to wait outside before giving her the racquet. Jayanthi meets Vilasini to tell her about her doubts on Anand hiding Kalyani in his room. Vilasini ridicules her for overthinking and asks her to remain calm before Akhila throws her out of Thrichambarath.

Krishnan consoles a disheartened Aravind and asks him to try and bring Nandana back to Thrichambarath. The latter tries to explain how it’s not possible for him to forgive Nandana but is saddened when Krishnan tells him about the many compromises he has to make during the marriage. Vilasini and Jayanthi are surprised to see a dance teacher come looking for Ganga. Akhila invites her to stay with the family while training Ganga for the dance competition.

In today’s preview for Chembarathi, Ganga starts practising for the competition with her new dance teacher. Kalyani watches the class through a window and tries to learn the steps.  During her practice, Kalyani falls on the floor and becomes unconscious. Who will save Kalyani? Stay tuned to find out!