In today’s episode of Chembarathi, Anand infuriates Vilasini by talking to Kalyani on her phone. 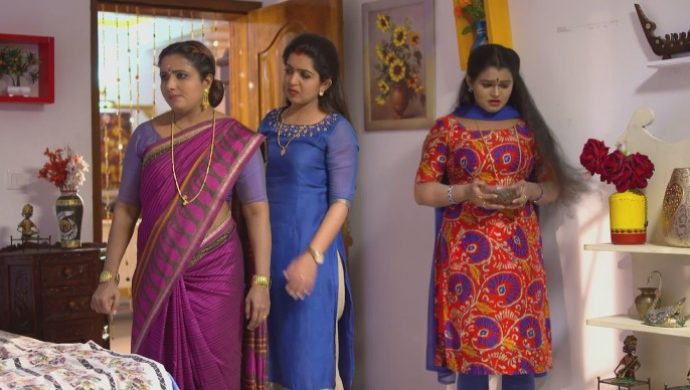 Previously on Chembarathi, Akhilandeshwari is disturbed as she is not able to reach Anand’s phone. She decides to leave for Mumbai to meet her son and packs her bags, despite Krishnan trying to stop her. Vilasini learns about the attack on Anand from Priyanka and is elated as she discusses Priyanka’s plans to kill Anand before he leaves Mumbai.

In Mumbai, the doctor assures Subramanian about Anand’s condition improving and the latter decides to inform Aravind about the same. Aravind is delighted to hear about his brother and thanks Subramanian for all the help. To Subramanian’s surprise, Anand wakes up and asks him about Kalyani and his mother.

Akhilandeshwari gets Anand’s call as she is about to leave for Mumbai. He lies to her about the attack and tells her that he was occupied with a business meeting, thus stopping her from coming to Mumbai. Kalyani is relieved upon she learning about Anand’s condition. Kalyani further thanks god for keeping Anand safe.

In today’s episode of Chembarathi, Anand calls Kalyani but gets interrupted by Vilasini who starts intimidating the Kalyani with her questions. Anand overhears Vilasini’s conversation with Kalyani and calls her. He asks Vilasini to hand over the phone to Kalyani, embarrassing her in front of Kalyani. The couple talk for a long time while Vilasini seethes with anger. Anand asks Kalyani to be courageous and confident while answering Vilasini. Kalyani returns Vilasini’s phone after talking to Anand and the latter leaves embarrassed.

Vilasini is angry and contemplates the events that happened in her room. Jayanthi walks in with food cooked by Kalyani and praises her culinary skills, thereby adding fuel to Vilasini’s anger. She slaps her and yells about how disrespectful Kalyani has become and continues to choke her. Nandana hears the commotion and walks in to save Jayanthi.

When Vilasini tells Nandana about Kalyani and Anand, the latter is infuriated and discusses her fears for Kalyani. Meanwhile Kalyani decides to call Anand and asks him to video call her. He tries to lie and not call her because of his bandages that cover the wound from the attack. He is quick to ask Subramanian for help to find something to cover his bandages.

While Subramanian runs out, Anand wears a kerchief and calls Kalyani. She gets intrigued by Anand’s new found interest in style and the couple starts talking for long. Meanwhile Subramanian gets into trouble as he tries to remove a woman’s cap and gets beaten up by a crowd. What will Nandana plan next to destroy Kalyani’s relationship with Anand?

This Rendition From Sa Re Ga Ma Pa Keralam Contestants Is The Best Christmas Carol Ever!