In today's episode of Chembarathi, Ganga's plan fails when her father drinks the spiked juice. Read the full update here. 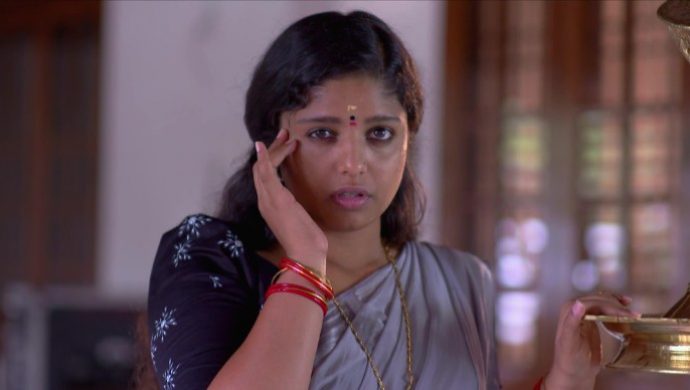 Previously on Chembarathi, Ganga plans to invite Kalyani and intoxicate her during the ceremony. Ganga demonstrates the effect of the chemical powder by asking Stella to drink the spiked juice. Stella starts feeling dizzy after drinking the spiked juice and tells them about her love for Subramanian.

Vilasini and Ganga are elated when Stella tries to embrace Subramanian as he walks into the room. Subramanian sprays water on Stella’s face to make her regain consciousness and he gets confused when Stella tells him that she doesn’t remember anything. When Stella goes to invite Kalyani to the ceremony in Thrichambarath, she warns her of Ganga planning to trap her.

Kalyani calls Anand and tells him about Ganga’s plans for her in the ceremony the next day. He assures her of his plan working out against Ganga and asks her to come to Thrichambarath for the ceremony. The next day Vilasini stops Kalyani from entering the house and threatens to ruin her marriage.

Meanwhile, Ganga and Vilasini think of a way to intoxicate Kalyani. The duo mixes the chemical powder in juice and asks Jayanthi to make Kalyani drink it. Jayanthi goes to Kalyani and tries to make her drink the spiked juice even after the latter resisting.

Ganga’s father drinks the spiked juice and yells at Jayanthi for giving it to Kalyani who doesn’t want it. Jayanthi lies to Vilasini and Ganga that she threw away the juice and tells them that Kalyani didn’t drink it. Meanwhile, Ganga’s father starts talking to himself and reveals that he is a rented actor posing as her father.

When Das finds Ganga’s father drowsy, he thinks that he is drunk and makes him sleep without Akhila finding out. Later on, Kalyani and Ganga are invited to dance for the guests before the ceremony by Akhila and Krishnan. Vilasini asks Kalyani to have sweets before dancing and makes the latter eat spiked sweets. Shortly afterwards, Kalyani feels dizzy from the spiked sweets and starts smiling at Anand who is in the room. What will happen next? Stay tuned to find out!

Birthday Special: These Pictures Are Proof That Nyla Usha Can Rock Any Outfit