In today’s preview of Chembarathi, Anand tells Subramanian and Aravind that Ganga is planning to trap Kalyani during the ceremony. 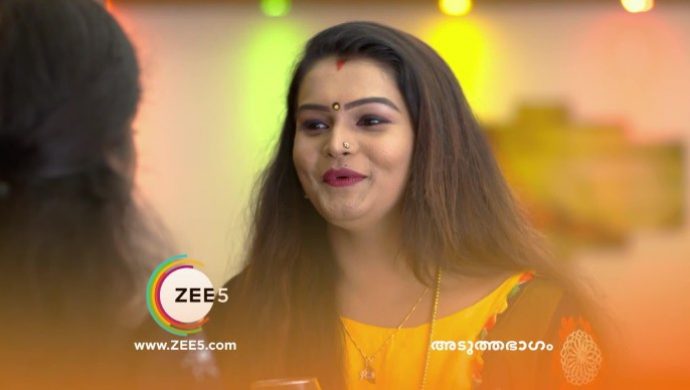 Previously on Chembarathi, Vilasini and Jayanthi tell Ganga that inviting Kalyani to Thrichambarath is a part of Anand’s plan. The duo is surprised when Ganga tells them that she is planning something big for Kalyani. When they ask her about her plan for Kalyani, she asks Jayanthi to bring juice.

Ganga discusses a plan to spike Kalyani’s drink and intoxicate her during the ceremony so that she will tell everyone gathered about her love for Anand. Ganga demonstrates the effect of the powder by asking Stella to drink the spiked juice. The evil trio is delighted to see Stella intoxicated and further ask her about her love for Subramanian. Meanwhile, Subramanian walks inside the room and finds Stella dizzy.

Later on, Stella goes to Kalyani’s house to invite her for the ceremony and tells her about Ganga’s plan to trap her. Stella also mentions about how Ganga and Vilasini made her drink the spiked juice. Anand assures Kalyani that his plan will work against Ganga and asks her to come for the ceremony the next day.

In today’s preview of Chembarathi, Anand tells Aravind and Subramanian that Vilasini and Ganga are planning to trap Kalyani during the ceremony. Meanwhile, Ganga shows Vilasini the chemical powder and plans to mix it in a juice to make Kalyani drink it. Anand tells Subramanian and Aravind that Ganga used the chemical powder on Stella. Jayanthi is seen asking Kalyani to drink the spiked juice. How will Anand tackle Ganga’s plan? Stay tuned to find out!

Get all the live updates on Coronavirus on ZEE5 News Section.