In today’s episode of Chembarathi, Kalyani succeeds in fixing the microphone in Ganga’s room. What will happen next? Scroll down to read more! 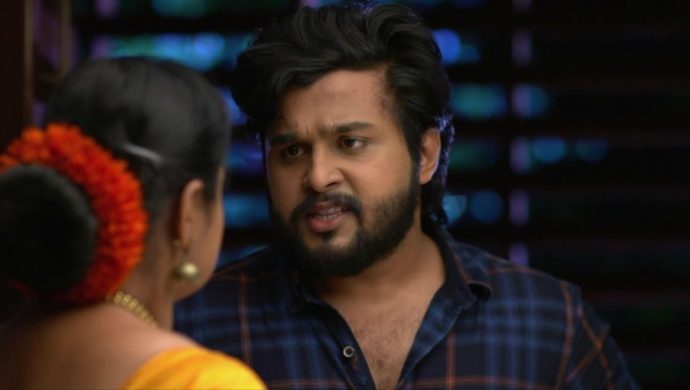 Previously on Chembarathi, Anand (Stebin Jacob) tells Ganga (Haritha Nair), that he will send her to jail before their marriage takes place. Aravind realises that Nandana still loves him as he overhears her conversation with Maheshwari. Ganga meets Krishnan to complain about Vilasini and also warns him of Maheshwari’s crooked plans for Thrichambarath. Vilasini joins Anand’s discussion with Aravind and informs them about Maheshwari plan for partition.

Anand and Aravind talk to Krishnan to find out regarding Vilasini’s claims. Anand tells Krishnan that he is willing to give away his share also to Aravind as he values their relationship more than anything. Krishnan gets elated noticing the brotherly love between his sons and tells Aravind that he is not going to partition the properties. The next morning Anand calls Kalyani to tell her that she needs to place the microphone in Ganga’s room again.

In today’s episode of Chembarathi, Kalyani agrees to fix the microphone in Ganga’s room as per Anand’s request. As she is fixing the device under the stool, Ganga walks in. Kalyani gets scared but she tells Ganga that she was in the room to give her coffee. Ganga uses the opportunity to mock Kalyani and asks her to clean the room before she leaves. As Ganga takes a call from Priyanka, Kalyani fixes the mic and leaves the room.

Later on, Subramanian meets Anand to discuss his plans for the upcoming marriage. Anand informs him about his plan to reveal Ganga’s true identity before Akhila with enough evidence.

Meanwhile, Vilasini and Ganga meet Sreeni to tell him about Maheshwari’s request for the partition. Vilasini gets disturbed when Sreeni tells her that the partition will leave her powerless as the properties will go to Anand and Aravind. Sreeni advises her to make a plan to partition the properties between, Krishnan and his brother so that she would also get a hefty share.

Later at night, Aravind meets Maheshwari and threatens to kill her if she ever tries to hurt his brother and father. Maheshwari replies to him by saying that she did everything for Nandana and asks him to come prepared if he is looking for war against her. Aravind warns Maheshwari again and goes to meet his wife. Nandana acts innocent when Aravind lashes out at her for trying to partition Thrichambarath. What will be Nandana’s reaction? Stay tuned to find out!

#5 Moments Of Saptathi When We All Wanted Her To Think Twice, But She Didn't

#5 Times Aravind And Subramanian Made Us LOL On Chembarathi