In today’s episode of Chembarathi, Akhila is in a dilemma as Krishnan reminds her of Kalyani’s sacrifices in the past. 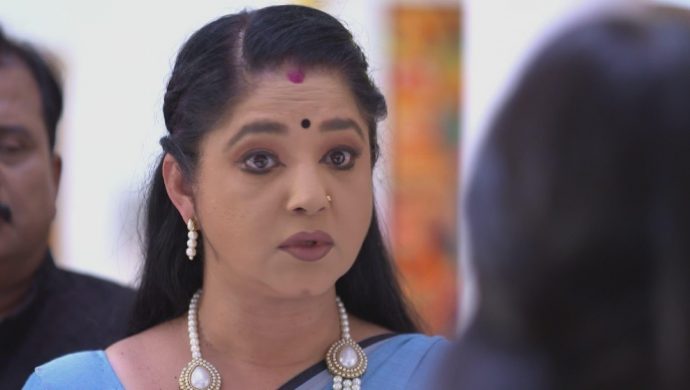 Previously on Chembarathi, Anand is disturbed when he finds that Kalyani has slashed her wrist. He tells her that he will also do something similar if she hurts herself again. He takes her inside the temple and promises to marry her in front of the idol.

Meanwhile, Akhila’s discussion about Anand’s marriage with Ganga continues in Thrichambarath. Guruji suspects that Kalyani will become a hindrance to Anand’s marriage and advises Akhila to banish her from the house. As Akhila starts explaining Kalyani’s virtues, Guruji asks her to prepare for a Shiva Linga pooja to get more clarity on the issue.

During the pooja the family members will have to pour milk on the idol and if the colour of the milk changes, the person will be banished from Thrichambarath. As the pooja begins, Vilasini is tensed as she is the first one to pour milk over the idol.

In today’s episode of Chembarathi, dramatic events take place. Akhilandeshwari asks Kalyani to leave Thrichambarath and never enter the house again because the colour of the milk changes during the pooja. The latter starts to sob and begs not to be banished, but Akhila stays adamant in her decision.

Anand follows Kalyani as she runs out of the house crying. He finds her talking to her Chembarathi flowers about her sorrows. Anand tries to console Kalyani but she bursts into tears as he approaches her. He asks her to stay optimistic and reminds her of the promise he had made at the temple. Elated at Akhila banishing Kalyani, Vilasini decides that the events from the pooja present the perfect opportunity to make a move against Kalyani. Unfortunately for her, she gets slapped by Akhila as soon as she begins to demean Kalyani.

Akhila is seen contemplating on her decision in asking Kalyani to leave Thrichambarath. Krishnan approaches her to inform how she was unfair in her decision and warns her about the consequences of her actions. He reminds her of the many sacrifices Kalyani had made for the family in the past. Akhila starts to regret her decision. Krishnan also criticises Akhila’s decision for deciding on Anand’s bride without asking him about his opinion. Will Akhila take Kalyani back? Stay tuned to find out!

Chembarathi 24 January Preview: Anand Assures Kalyani That He Will Marry Her