In today’s episode of Chembarathi, Anand stops Jayanthi from entering his room before leaving for the office. 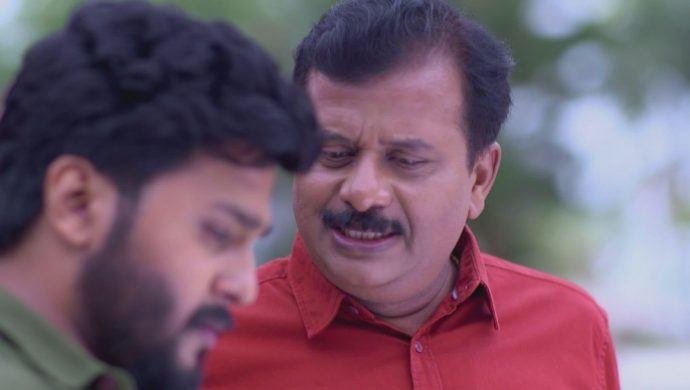 Previously on Chembarathi, Anand and Kalyani are surprised when Subramanian walks into the room during their conversation. Kalyani is quick to hide behind Anand when Subramanian starts asking him about Nandana leaving. Anand asks Subramanian to go to the dining hall to have breakfast and hides Kalyani.

During breakfast, Akhila asks Sujatha why Anand is staying in his room to have breakfast. Meanwhile, Kalyani is disturbed when Anand tells her that he is not sure of why Nandana left Thrichambarath. Anand gets scared when Sujatha calls him downstairs as per Akhila’s orders.

Akhila is quick to notice Anand acting different and asks him about the same. He pretends to be on a call and takes breakfast upstairs to his room so that Kalyani can have it. When he gets back, Ganga and Vilasini get suspicious of Anand’s behaviour as he lies to Akhila about being busy with work.

In today’s episode of Chembarathi, Anand lies to Subramanian that he forgot his wallet back in his room and goes to meet Kalyani. He asks Kalyani to be alert and asks her to lock the room from inside. As Anand and Subramanian prepare to leave, he sees Jayanthi running upstairs to his room. Anand catches her trying to sneak into the room and stops her from opening the door.

Jayanthi lies to Anand about trying to enter his room to take his badminton racquet. The latter gets inside and asks her to wait outside before giving her the racquet. Jayanthi meets Vilasini to tell her about her doubts on Anand and explains how she suspects him of hiding Kalyani in his room. Vilasini ridicules her for overthinking and asks her to calm down before Akhila throws her out of Thrichambarath.

Aravind is seen disheartened about his wife Nandana leaving Thrichambarath. Krishnan approaches to console him and tells him how differences are common between couples. He also asks him to try and bring Nandana back from her house. Aravind tries to explain how it’s not possible for him to forgive Nandana but is saddened when Krishnan explains to him about the many compromises one has to make during the marriage.

Meanwhile, Vilasini and Jayanthi are surprised to see a dance teacher entering the house looking for Ganga. Unaware of Priyanka’s plan, Akhila welcomes her inside and asks her to stay in Thrichambarath while training Ganga for the competition. Vilasini is elated when Akhila asks Ganga to prepare well for the competition to defeat Kalyani. How will Kalyani win the dance competition? Stay tuned to find out!