In today's preview of Chembarathi, Jayanthi tells Vilasini how she suspects Anand of hiding Kalyani in his room. 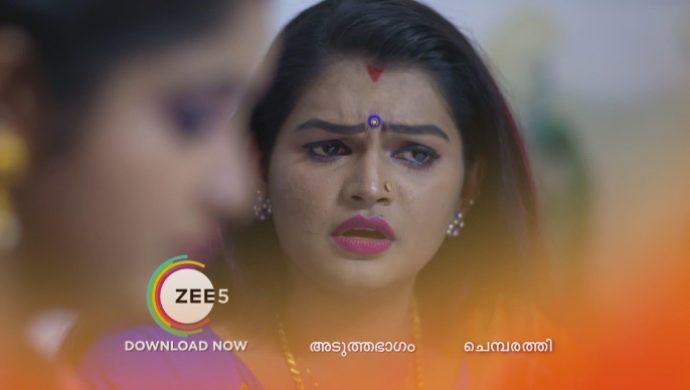 Previously on Chembarathi, Anand and Kalyani are surprised when Subramanian interrupts their conversation. His questions about Nandana leaving startle Anand as Kalyani hides behind him. He asks Subramanian to go to the dining hall to have breakfast and hides Kalyani.

During breakfast, Akhila criticises Sujatha for her cooking. She asks why Anand has asked Sujatha to get him breakfast to his room and orders her to make him come join the family. Meanwhile, Kalyani is disturbed when Anand tells her that he is not sure why Nandana left Thrichambarath. Anand gets scared when Sujatha calls him downstairs as per Akhila’s orders.

Anand goes downstairs and worries about Kalyani starving in his room. He pretends to be on a call and takes breakfast upstairs to his room so that Kalyani can have it. When he comes back, Akhila asks him why he looks worried. Ganga and Vilasini get suspicious of Anand’s behaviour as he lies to Akhila about matters at the office.

In today’s preview of Chembarathi, Jayanthi tells Vilasini that she suspects Anand of hiding something. She tells Vilasini how Anand must have been hiding Kalyani in his room the entire time, making him look tensed. As Anand leaves for his office, he watches Jayanthi trying to sneak into his room. Will Jayanthi find Kalyani in Anand’s room? Stay tuned to find out!