Anand gets taken aback when Kalyani rushes into his arms. 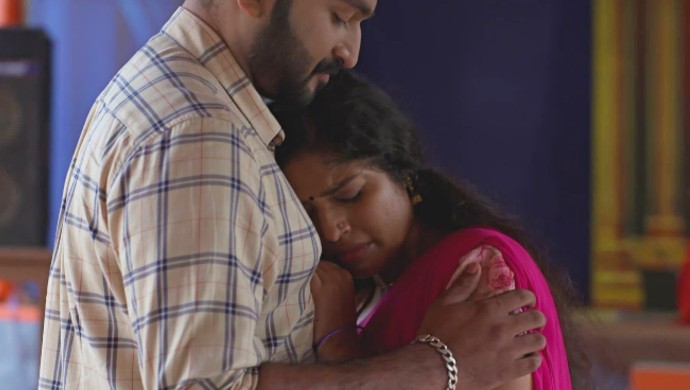 When Akhila informs Anand that Kalyani will be staying at the mansion until her marriage to Chandrapratap, Anand feels tormented. He goes to his room and tries to burn Kalyani’s photograph. Just then Kalyani comes to his room, wanting to talk to thank him for saving his life. When she requests him to turn around, Anand retorts that he hates seeing her face. An upset Kalyani goes to the temple where Anand overheard her telling God that there is only room for Anand in her heart. She turns around to find him standing behind her.

When she spots him, she runs to him and puts her arms around him. They stand there like that in each other’s arms for sometime as Aravind and Sunny look on in delight. Just then Vilasini enters the temple and is shocked to see them like that. Kalyani also suddenly realises what she is doing and gets stunned. She runs away in shock. Aravind and Subbu congratulate him and then tell Anand that it is now time to send Chandrapratap packing, back to Mumbai.

Vilasini overhears all this and is enraged. She swears to ruin their plans. Kalyani goes home to cries in front of her mother’s photo about the confusion in her heart and her fate. Krishnan tells his son that he is saving his mother’s life and reputation by helping them marry Kalyani off to Chandrapratap. He asks Anand to promise that he will help save his mother’s honour. Akhila walks in then and sends Anand packing. She tells Krishnan that he shouldn’t ask Anand for such a promise and that even if he married someone who is not right for the family, it wouldn’t matter as his happiness matters most. Kalyani overhears this and is first happy, then feels wretched about her situation and how all these people have to compromise their happiness because of her.

Meanwhile Chandrapratap is standing on the street and spots Sujatha walking by. He tries to misbehave with her and she raises a hue and cry. A crowd gathers and beats him up. Will Chandrapratap’s real nature be discovered by Akhila? To know more, watch Chembarathi from Monday to Saturday evening on ZEE5.

For more such entertainment and drama, watch Pookalam Varavayi, now streaming on ZEE5.

Watch And The Oscar Goes To, The Tale Of A Struggling Film Maker

Five Original Series To Watch Over The Weekend