In today’s episode of Chembarathi, Vilasini and Jayanthi gets impressed by Ganga’s plan against Kalyani. Read the full update here. 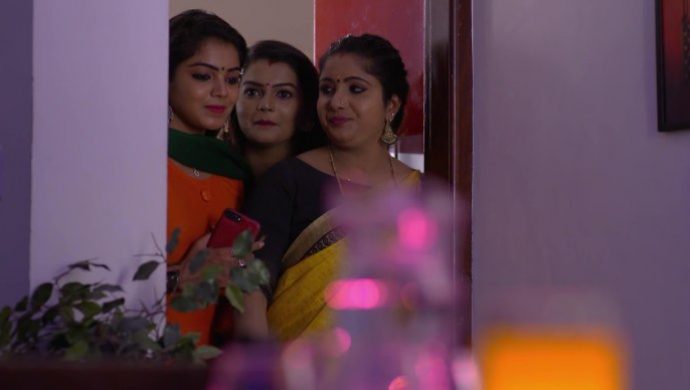 Previously on Chembarathi, Vilasini tells Ganga’s parents that Anand is in love with Kalyani. Anand tells everyone gathered that Kalyani’s marriage will happen before Ganga’s. Akhila assumes that he is talking about the marriages undertaken by the family to help underprivileged girls as per Guruji’s requests.

While returning back to his room, Ganga stops Anand and tells him that she will be the one winning the challenge. He replies saying that it won’t be considered winning because Kalyani won’t be present in Thrichambarath because of Akhilandeshwari banishing her from the house. Ganga thinks of a way to get Kalyani back in Thrichambarath and seeks Akhila’s permission to invite the latter to the ceremony the next day.

In today’s episode of Chembarathi, Jayanthi and Vilasini tell Ganga that Anand telling her that she won’t be winning the challenge is a part of his plan to bring Kalyani to Thrichambarath. Ganga tells Vilasini and Jayanthi that she is planning something big for Kalyani. When they ask her about her plan for Kalyani, she asks Jayanthi to bring juice.

Ganga discusses a plan to add a chemical powder to intoxicate Kalyani during the ceremony so that she will tell everyone gathered about her love for Anand. Ganga demonstrates the effect of the powder by asking Stella to drink the spiked juice.’

Subramanian sprays water on Stella’s face to make her regain consciousness and he gets confused when Stella tells him that she doesn’t remember anything. Later on, Stella goes to invite Kalyani to the ceremony in Thrichambarath and tells her that Ganga insisted on inviting her. Stella tells Kalyani that Ganga is planning to trap her during the ceremony and tells her about the trio making her drink the spiked juice.

Kalyani is quick to call Anand and she tells him about Ganga’s plans for her in the ceremony the next day. He assures her of his plan working out against Ganga and asks her to stay optimistic. The next day Vilasini stops Kalyani from entering the house and threatens to ruin her marriage. Vilasini tells the latter that she will make her leave Thrichambarath by the end of the ceremony. How will Anand save Kalyani? Stay tuned to find out!