In today’s episode of Chembarathi, Anand is shocked to see Kalyani’s bleeding wound on her wrist. 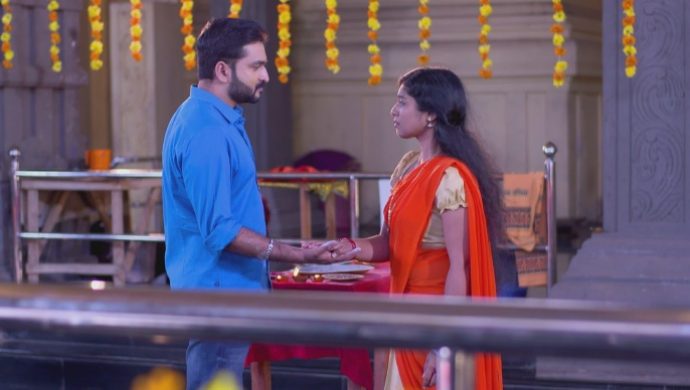 Previously on Chembarathi, Anand asks Kalyani to come with him for preparations for the pooja regarding his marriage. Kalyani hides her bleeding wound from Anand and listens to him trying to console her as he starts driving. He assures her to be optimistic and informs her that his parents wouldn’t fix his marriage before matching his horoscope first.

Back in Thrichambarath, Vilasini tries to lure Ganga with her gold ring. She is agitated when the latter informs her of Akhila’s warnings about her evil motives. Ganga removes her diamond necklace and gifts it to her as a reply to her offer. Vilasini runs to Nandana to inform her about Ganga’s arrogant reply. Nandana suspects a hidden agenda behind Ganga’s introduction in Thrichambarath and asks Vilasini to be careful.

Guruji arrives in Thrichambarath as per Akhila’s request to match Anand’s horoscope with Ganga’s before fixing their marriage. Krishnan urges him to lie to Akhila if the results contradict her expectations. Guruji is delighted when he finds Kalyani’s horoscope aligning with Anand’s.

In today’s episode of Chembarathi, Anand continues to drive with Kalyani unaware of her bleeding wound. He tells her about his love for her and thanks her for not hurting herself when she got disturbed by Ganga’s introduction. As they reach the temple, Anand is angered by Kalyani’s silence and he pulls her out of the car. He is saddened to see her bleeding wrist and tells her how he will also commit something similar. Later on, he takes her inside the temple and promises to marry her in front of the idol.

Back in Thrichambarath, Guruji tells Akhila about Kalyani’s horoscope being a hindrance to Anand’s marriage with Ganga. The latter is disheartened on hearing Guruji’s comments on Kalyani’s horoscope and defends her place in the family. He asks her to make arrangements for pooja to get more clarity on the issue. During the pooja the family members will have to pour milk over a Shiva linga and if the colour of the milk changes, the person will be banished from Thrichambarath.

Meanwhile, Vilasini asks Nandana to meet Ganga to understand the agenda behind her unexpected entry. The latter meets Ganga and gift her a gold ring that she happily accepts. Vilasini is troubled as Ganga figures out her plans and thinks of a way to lure the newcomer to her side, against Akhila.

Guruji thinks about his actual plan, which is to find a suitable match for Anand by recognizing the change in the milk’s colour. Vilasini is tensed about the result as she is asked to pour milk on the idol. What will be the end result of the pooja? Stay tuned to find out!