In today’s preview of Chembarathi, Guruji asks Krishnan and Akhila to banish a person from Thrichambarath to make Anand’s marriage possible. 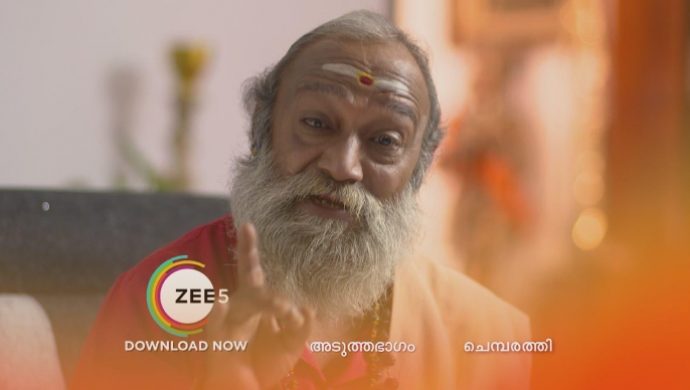 Previously on Chembarathi, Anand asks for Das’s permission to take Kalyani out, unaware of her slitting her wrist to commit suicide. The couple goes for a drive and Anand starts to explain his helplessness in front of his mother’s decisions. But he reassures her and tells her not to give up hope because for his parents to fix his marriage with Ganga, their horoscopes will have to match.

Meanwhile in Thrichambarath, Vilasini schemes of ways to reel in Ganga also to her plans against Akhila and offers her a gold ring as a welcome gift. The latter removes her diamond necklace and asks Vilasini to take it instead. She is agitated when Ganga tells her about how Akhila had warned her of Vilasini’s evil ways.

Guruji arrives in Thrichambarath to match Anand’s horoscope with Ganga’s before fixing their marriage. Krishnan urges him to lie to Akhila if the results are going to contradict Akhila’s expectations. Guruji is delighted when he finds Kalyani’s horoscope aligns with Anand’s and is reminded of the time Kalyani did the pooja in the temple.

In today’s preview of Chembarathi, Guruji reviews the horoscopes of the entire family. He asks Krishnan and Akhila to banish a person from Thrichambarath to make Anand’s marriage possible with Ganga. Meanwhile, Anand is seen annoyed at Kalyani as she is not getting out of the car. Kalyani groans in pain as Anand grabs her by her bleeding hand to get her out of the car. Will Anand find out that Kalyani is injured? Stay tuned to find out!

#4 Reasons That Proves Krishnan From Chembarathi Is A True Gentleman