In today’s preview of Chembarathi, Vilasini removes her ring and offers it to Ganga. 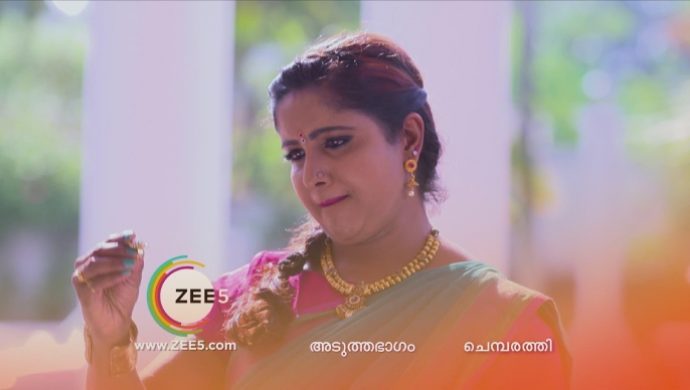 Previously on Chembarathi, Anand’s plan fails as Akhila introduces Ganga as the suitable bride for him. What’s worse, Akhila asks Kalyani for an opinion on her choice. Holding back tears, Kalyani accepts her fate and praises Akhila’s decision. Vilasini and Nandana are impressed by Akhilandeshwari’s unexpected move and delighted to see Kalyani tearing up.

Anand discusses a solution to Ganga’s arrival at Thrichambarath so that he can save his relationship. Aravind and Subramanian advice him to meet Kalyani and console her before he makes a move to resolve the problems arising from Ganga’s introduction to the family.

Kalyani is devastated to learn about Akhila’s plan to fix Anand’s marriage with Ganga. She cries in front of her deceased mother’s picture and apologizes to her for deciding to take her own life. As she grabs a knife to slit her wrist, Das calls for her. Startled by Das’s sudden arrival Kalyani covers the bleeding with a bandage and wraps her saree around it.

Das is jubilant to learn about Akhila’s decision and tells Kalyani about the same. A disturbed Anand walks into the house at the same time and asks Kalyani to come out with him.

In today’s preview of Chembarathi, Vilasini is seen planning ways to reel in Ganga to her plans. As the latter walks into the house, Vilasini removes her gold ring and asks Ganga to wear it. The unexpected change of expression on Ganga’s face shocks Vilasini. What will be Ganga’s reply to Vilasini’s offer?