In today’s preview of Chembarathi, Vilasini and Jayanthi try to catch Kalyani when she tries to enter the house. 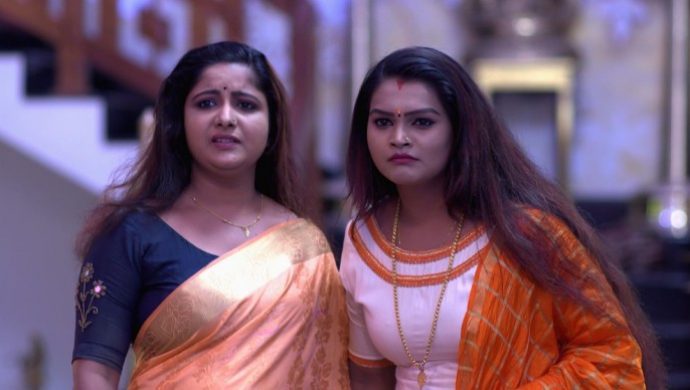 Previously on Chembarathi, Aravind tells Nandana how both of them had agreed to not have children before Anand gets married. Krishnan tries to stop Nandana but she yells at him and tells him how she doesn’t value his opinion because he only listens to his wife.

Nandana leaves Thrichambarath when Akhila slaps her and orders her to leave the house for yelling at Krishnan. Disheartened by his wife leaving, Aravind returns to his room. Vilasini, Ganga and Jayanthi are happy at the sudden turn of events.

Krishnan is disturbed about Nandana leaving the house and Akhila tries to console him. She stops him when he decides to call Nandana’s father to bring her back. Meanwhile, during their journey to the dance school, Anand asks Kalyani to sleep for a while and drives back to Thrichambarath.

When Kalyani questions Anand’s plan, he is quick to persuade her to come to his room. Jayanthi watches the couple preparing to enter the house and wakes up Vilasini to inform her of the same. When he enters the house, Vilasini starts questioning him about Kalyani’s whereabouts. When Anand tells her that she is at the dance school, Jayanthi tells him that he is lying as she saw the both outside.

In today’s preview of Chembarathi, Jayanthi and Vilasini hide in the dark to try and catch Kalyani. When Kalyani tries to sneak into Anand’s room, they both try to stop her. Jayanthi is seen getting a hold of Kalyani. Will Kalyani escape? Stay tuned to find out!

Bring Twice The Fun To Your Week With The Funniest Characters From ZEE5 Malayalam Shows!