Despite being banned from entering Thiruchambarath, Kalyani sneaks in to thank Anand for saving her life. 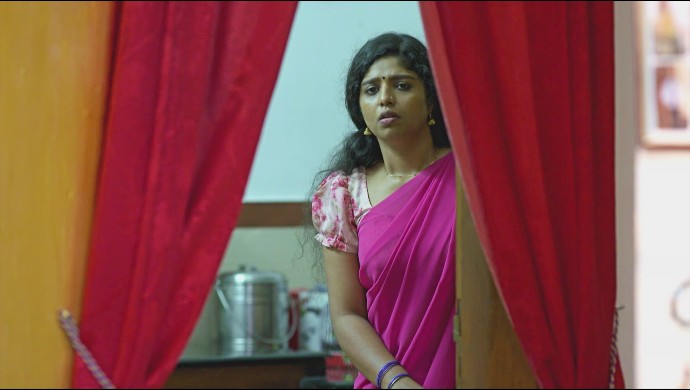 In the previous episode, we saw that Anand gives Priyanka a week’s time to leave the country or face terrible consequences. He comes home to find out that Kalyani has been revived and Akhilandeshwari has renewed her plan of marrying Kalyani off to Chandrapratap. He gets upset and walks off. Das explains to Kalyani why she will have to marry Chandrapratap. On the terrace, Anniyankuttan narrates to Kalyani how emotional Anand got when she was unconscious.

The current episode opens with Anand’s brother and cousin advising him not to worry and that they will somehow ensure that Kalyani belongs only to him. Anand retorts that it’s not so easy as he is not sure of Kalyani’s feelings for him either. Meanwhile, Anniyankuttan talks to Kalyani on the terrace and tells her that he hopes Kalyani and Anand will get together someday. Kalyani retorts that he should not talk like that because not only is her marriage to Chandrapratap already fixed, she also cannot hope for marrying somebody with so much wealth and status like Anand. Anniyankuttan prays to his mother’s photo to help them out and a flower falls from her photo. Anniyankuttan gets overjoyed to see this as it means Kalyani is destined to marry Anand.

Later, Kalyani sneaks into the house to secretly meet Anand. She wants to thank him for saving her life. She runs into Sujatha who tells her that since Akhila has asked her to not enter Thirumchambrath, she cannot be seen in the house. As they are debating this, Akhila and Krishnan enter the adjacent room. Kalyani is trapped. She hides in the kitchen while Sujatha pretends to work. Akhila is shocked to discover an article about Kalyani and Anand that writes about a plot afoot against the family. She asks Sujatha to go to the outhouse and summon Kalyani. Sujatha is trapped since Kalyani is hiding only a few feet away. Vilasini finds this suspicious and goes to the kitchen to check. Sujatha reluctantly goes out and meets Kalyani there who escaped from the back door. Kalyani enters Thiruchambarath again, this time as per Akhila’s summons. Akhila tells her that henceforth, until her marriage to Chandrapratap is solemnised, she will have to stay in Thiruchambarath and asks Jayanthi to share her room with her. This draws protest from both Vilasini and Jayanthi. But Kalyani is happy as now she will get the opportunity to thank Anand.

For those who haven’t seen the last few episodes, here’s what you missed. Kalyani, the household cook at Thiruchambarath and Anand, the scion of the wealthy family slowly start falling in love. This is not acceptable to his mother, the iron-willed Akhilandeshwari, especially since a news article appears about it. She arranges Kalyani’s marriage to another man of spurious background, Chandrapratap. Meanwhile Kalyani is kidnapped by Priyanka, Anand’s ex-fiance who also attempts to murder her, hoping to implicate the entire Thiruchambarath family and thus take revenge upon them. To know what happens to Kalyani and Anand, log into ZEE5 and watch Chembarathi every night.

For more such entertainment and drama, watch Alliyambal, the love story of a village teacher and martial arts instructor, now streaming on ZEE5.

What Actors Do When Their Co-Stars Are Much Taller; Arun From Pookalam Varavayi Explains